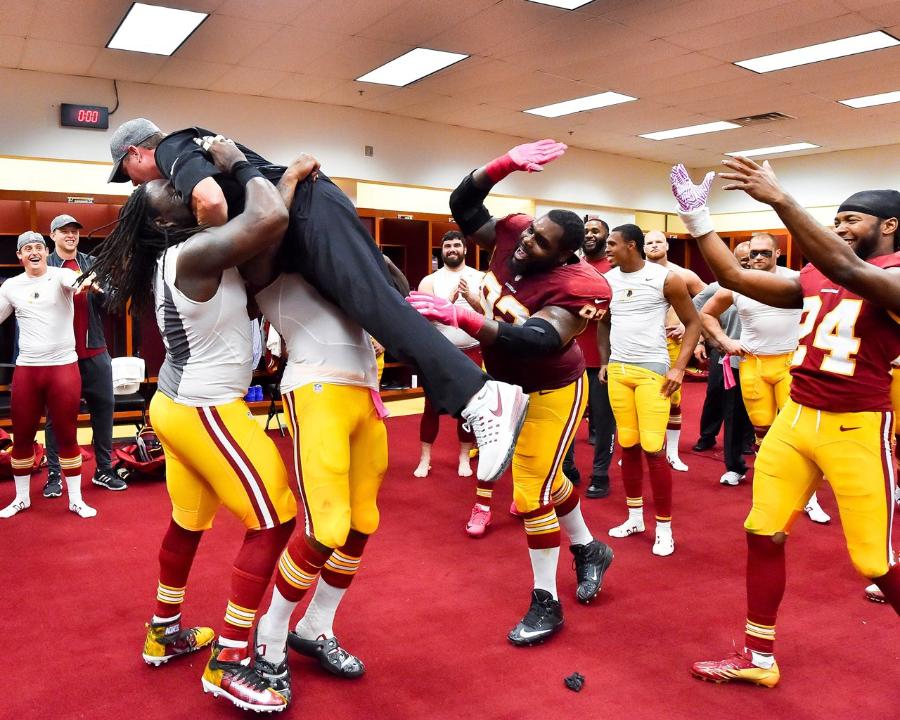 According to Wikipedia in Greek mythology, “Cerberus, often called the Hound of Hades, is a monstrous multi-headed dog, who devours flesh, guards the gates of the underworld, and prevents the dead from leaving.”

On Sunday, the Washington Redskins three-headed rushing beast comprising of running backs Matt Jones, Robert Kelley, and Chris Thompson, prevented Redskins fans from leaving the stadium and devoured 230 yards against the hapless Philadelphia Eagles run defense. With an anemic rushing attack that hasn’t been impressive so far this season, I guess every three-headed dog has its day no?

Kelley played with some serious explosiveness, averaging 11.8 yards a carry, and now looks to motivate Jones and Thompson by helping them elevate their play, as it is not just the two of them who now share the workload. They better produce with each carry or someone else will get the ball.

The Cerberus is always hungry and needs to be fed.

A healthy amount of carries will have to be called for to help keep them in a healthy competition. This might finally be the way the Redskins get their running game going and in turn, open up the passing game to new heights. Looks like Redskins fans who have been calling for Kelly to run the ball more are definitely “sipping their tea” today with a smile.

With a healthy running game and a balanced attack, the time of possession which, the Redskins won by almost 9 minutes, became a major factor in keeping the Eagles offense from gaining any sort of traction until it was almost too late.

Additionally, the defense now seems to have figured out a new concept, that in order to rattle rookie quarterbacks you need to apply pressure and they seemingly struggle. This novel concept has for some reason, eluded Redskins defensive coordinators for ages. Finally, they acted on this strategy and it paid huge dividends by keeping Carson Wentz running for his life and being sacked 5 times.

It started from the first sack Wentz took when Ryan Kerrigan, who’s arms look like as big as some people’s legs, ripped Wentz’s jersey into shreds in the process of bringing him down to the ground. Kerrigan did his Shawn Michael’s sack dance to the delight of the crowd. I half expected him to throw a shred of the jersey into the air and exclaim: “ Are you not entertained?!”

Kerrigan would go on to get 2.5 half sacks and looked unstoppable against the Eagles right tackle, and you might have to spell check this for me, Halapoulivaati Vaitai. The Eagles tried to help Vaitai out with a running back or tight end occasionally, but it was for naught as Kerrigan treated Vaitai like those arm less tackle dummies they use in practice.

While this was an impressive win it still lacks the dominant traits of a playoff team with serious aspirations to advance past the first round. Some call it the “killer instinct” to crush an opponent when they are down and out. With a 14 point lead that disappeared in the blink of an eye in the 2nd quarter when the Eagles returned a punt and had a pick-6 to even up the game, the Redskins didn’t let it rattle them, but they made it too easy for the Eagles to stay in the game when they had no business being that close.

These things are correctable and once the Redskins learn how to eliminate those big mistakes, continue playing great defense and utilizing the three-headed monster to fend off the underworld maybe they can walk among the Gods and keep this unfathomable winning streak going, and going, and going.