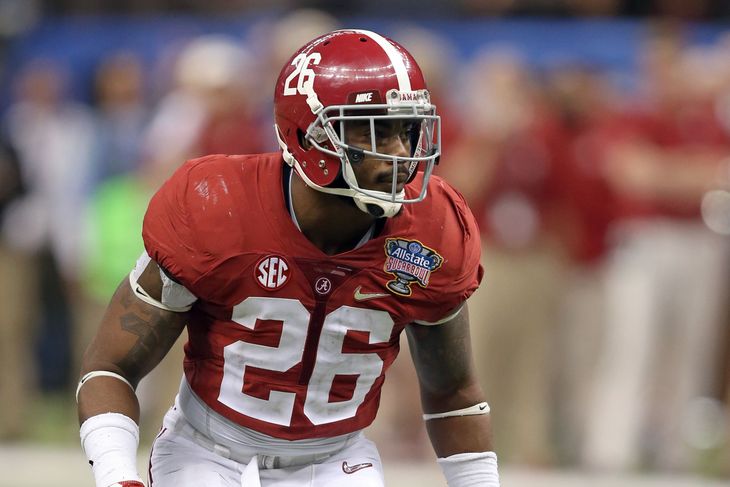 Alabama safety Landon Collins is widely predicted to be the first safety off the board during next week’s NFL Draft.  A unanimous first-team All American, Collins impressed during his three seasons with the Crimson Tide with his versatility, physicality, and drive.  And to make him an even more attractive option for Washington fans, Collins is a born and raised Redskin fan who has repeatedly gone out of his way to tell all that will listen that Sean Taylor is his hero.

“I idolized Sean Taylor for his physical play, his passion for the game, you could see it every time he touched the field… and I like being physical in the box”, Collins told reporters at the NFL Combine earlier this year.

During his time with both the San Francisco 49ers and the Seattle Seahawks, McCloughan was involved in numerous draft trades, so we know that he is fluid in his approach and more than willing to make moves when necessary.  Another thing that we know about McCloughan is that he has a certain affinity for drafting players out of the SEC.  The 2015 draft is also the first time since 2012 and the RGIII trade that the Redskins have their full clutch of picks:

With the Redskins 2nd round pick coming in at 38th overall, the possibility of using that pick and trading up into the mid-to-late 1st round to get Landon Collins is not outside the realm of possibility.  Just last year, we saw the Vikings trade the 40th (2nd round) and 108th (4th round) picks to Seattle for pick 32 so they could take Quarterback Teddy Bridgewater, which gives us a barometer for what the required trade value might be if the Redskins do consider trading up.

Former NFL scout Daniel Jeremiah, now working as one of NFL.com’s key draft analysts, currently has Landon Collins going to the Pittsburgh Steelers at pick 22.  Bucky Brooks has him going off the board even later, at 29 to the Colts. From looking at multiple mock drafts, the consensus seems to be that Landon Collins’ value currently sits somewhere between picks 20 and 30.

This means that if Landon Collins is still on the board in the late 1st round, and McCloughan decides that drafting a talented and driven young safety who has a burning desire to play for the Redskins fits in with the overall plan for the development of this roster, then it is definitely possible to make happen.

If the Redskins want to trade up from 38 to somewhere in the range of picks 20-26, then the price would likely either be the Redskins 2nd and 3rd round selections in 2015, or potentially a 2015 2nd and a 2016 2nd.  This price is certainly on the high-side, but moving up over 10 spots into the 1st round would require such a price.  However, if Collins is, as some predict, still on the board after pick 26, then the price starts to become more bareable.  Moving up from 38 to 28 may be possible for the lower price of the Redskins 2nd and 4th round picks, which would be a good price to pay if Landon Collins does live up to expectations and becomes a quality starting safety in the NFL for the next 10 years.

The question for Redskins fans, as well as General Manager Scot McCloughan, will be ‘Is Landon Collins worth it?’

Collins ticks all the boxes you want to see from a young safety in the modern game; he’s smart, tough, and plays well against both the pass and the run. His speed, agility and size all fit the requirements of a prototypical safety.  He is a strong open field tackler, and does well to contain yards after the catch or yards after contact. His intangibles are superb, and these are perhaps best demonstrated by his role as a core special teams player for Alabama, which is an area the Redskins desperately need to address. In short, he has the potential to be considered a steal in the late 1st round if he can live up to his potential.

Some might argue that the acquistions of Jeron Johnson and Dashon Goldson mean that the Redskins aren’t in desperate need of a safety, especially if it meant trading up to get one.  However, Johnson has never gone into a season as a true starter, and Goldson is on the wrong side of 30 coming off a poor year with the Buccaneers.  In fact, an argument could be made that the acquisitions of Johnson and Goldson provide perfect cover for trading up to get Landon Collins; it would provide new defensive coordinator Joe Barry with flexibility, depth, and a mix of young and old talent at the position.

Trying to accurately predict the NFL draft is more often than not an exercise in futility, and it’s entirely possible that a team falls in love with Landon Collins and takes him significantly higher in the draft than he’s currently projected. The flip side could also eventuate, and Collins may even slide to the Redskins pick at 38 overall.

However, if conventional thinking holds true, and Collins is still on the board in the last 1st round, don’t be shocked if the Redskins war-room is a hive of activity mulling over a potential move up.