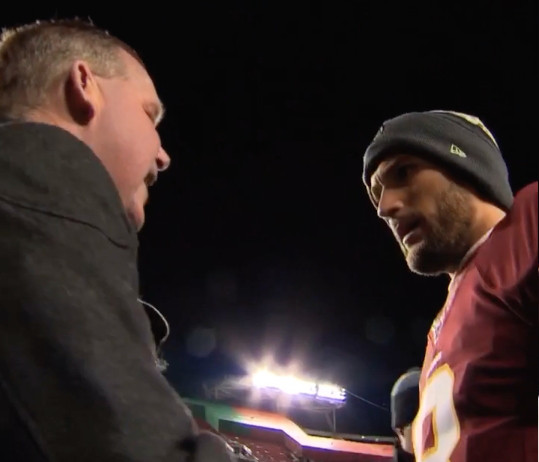 The Washington Redskins have a plethora of big decisions to make in regards to their roster this coming offseason. 16 total players are due to be unrestricted free agents including big names like DeSean Jackson, Pierre Garcon, and Chris Baker. Among that list of names, none of those players are as important as quarterback Kirk Cousins. Kirk had a surprisingly great year as a first time full-fledged starter in the 2015-2016 season. He broke the franchise record for single season passing yards, lead the Redskins to a NFC East Division Championship, and a trip to the playoffs. After being franchise tagged during the offseason, he then followed that with another great season this year, breaking his single season passing yards record and leading the Redskins offense to rank 3rd overall in total offense.

Now the time has come, once again, to decide whether Kirk Cousins is worthy of being paid the big bucks. The Redskins reportedly low balled him with their offer last year which lead to them having to tag him. He accepted the tag and sought out to prove that last year wasn’t a fluke. Well, it turns out it wasn’t. He’s proven to be a capable starting quarterback in the NFL. Now his market value is reported to be in the $26 million a year range. That’s more than what Andrew Luck makes (roughly $24 million a year).

Here’s what I believe:

I believe that the Redskins are very satisfied with what Kirk has done and are prepared to make him a very generous offer to get him on a long term deal. They don’t have a very solid option behind him and the draft is a total crap shoot. Finding the next Russell Wilson or Dak Prescott is like winning the lottery. Kirk has all the leverage. When asked about whether Kirk wants to come back to play for the Redskins, his reply is “I want to play where I’m wanted” or “it really isn’t my choice” or “it’s really not my call.”

Isn’t it though, Kirk?

He “wants to play where he’s wanted” = equals “show me the money”. If the Redskins come out and give him an outrageous amount (I hope not) I think he’ll stay. But here is where I get to the whole point of this blog post:

Why play in Washington when you can get the same price, if not more, somewhere else?

There are many teams out there that are in serious need of good quarterback play. The Cleveland Browns, San Fransisco 49ers, New York Jets, Chicago Bears, etc all are in dire need of a good quarterback. Kirk can basically choose where he wants to go while getting his payday at the same time. Speaking of teams that need a good quarterback. I’ve got a sleeper team that wouldn’t surprise me in the least to make a big push for him if he hits the open market- the Denver Broncos. John Elway has never been shy so far in his stint as the team’s GM to make high-paying splashy moves. If you’re Kirk Cousins and you have the same offer on the table from the team that drafted you or the Broncos, what would you choose?

Exactly…. (if you said the Redskins you’re fooling yourself)

There isn’t a “hometown discount” or loyalty to the team that drafted you. It’s all business when it all comes down it. Kirk is going to do what’s best for Kirk. “But, Robbie, what about the just tagging Kirk for another year or try to trade him after that?” That appears to be not on the table according to multiple reports. Either the Redskins and Kirk agree on a long term deal or they don’t. Kirk is going to go where he gets paid *cough* I mean “wanted”. Whether that is with the Redskins remains to be seen…..