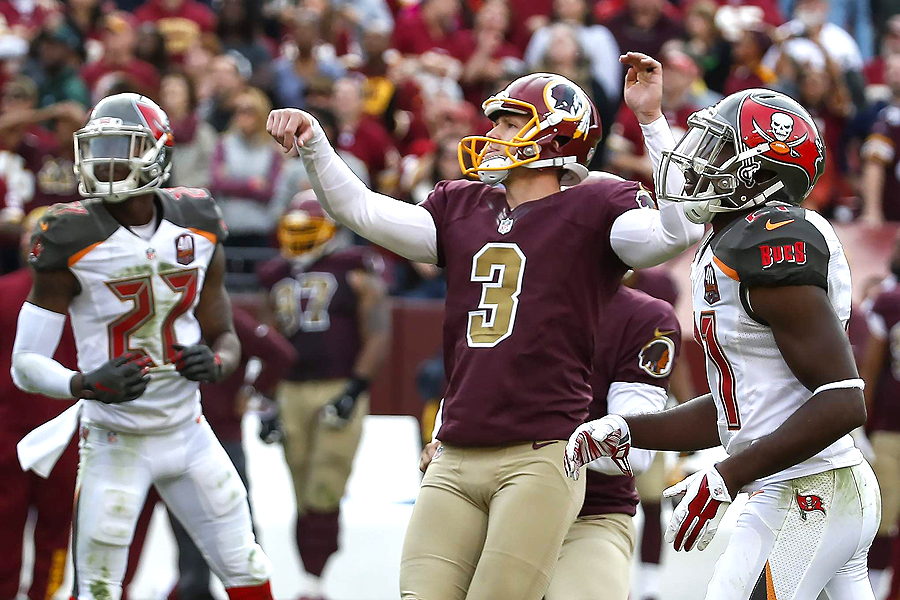 This season has seen an inordinate amount of fluctuation at the Kicker position around the league, and it feels like almost every team in the NFL has a bad beat story about a missed field goal costing them dearly in 2015.

Almost every team. But not Washington.

After parting ways with Kai Forbath following the Week 1 loss to Miami, the Redskins signed (then) 24 year old Dustin Hopkins, a 2013 6th round draft pick selected by Buffalo who had yet to attempt a Field Goal during the regular season.

Whilst Forbath’s career accuracy was never an overly concerning issue for the Redskins (60/69 on Field Goal Attempts, and 91/93 PATs over his career in Washington), his consistent struggles to put the ball into the endzone and force touchbacks on kickoffs meant that the Redskins Special Teams coverage unit was constantly under pressure. Coach Jay Gruden, when asked about the decision to release Forbath and sign Hopkins, didn’t mince words when explaining the reason behind the switch:

“I think Kai was a good kicker for us for a few years now, very accurate obviously inside of 40. But I think moving forward, you look at the total package of what a kicker needs to bring to your football team and we were looking for a little bit of a stronger leg, especially on kickoffs. That’s the bottom line.

All we’re trying to do is improve our kickoff cover team and we’re trying a young kicker who worked out here extremely well today.”

Whilst Hopkins certainly impressed with his leg strength during his workout with the Redskins that led to his signing, he still represented a total unknown commodity on game day.

It quickly became evident against the St Louis Rams in week 2, his first game in the Burgundy and Gold, that the Redskins may have found a solution to their kickoff problems; Hopkins had 5 kickoffs, all of which went into the endzone, and all but 1 of them were touchbacks.

Hopkins has continued to flourish, and out of his 31 kickoffs since signing, 25 have been in the endzone and 22 have been touchbacks, with an average return yard percentage of 15.7.

To put that number into perspective, the Redskins are first in the NFC (and third in the NFL) in average return yard percentage allowed with a total of 17.9, which includes week 1 when Kai Forbath was on the roster.

The leg strength that Hopkins possesses was on display in week 5 versus Atlanta, when he converted a career-long 52-yard field goal with no time remaining in regulation to force overtime. That 52 yard field goal was the longest by a member of the Redskins since Dec. 24, 2011, and Hopkins became the first Redskins kicker to force overtime with a game-tying field goal in the final minute of regulation since John Hall vs. the New York Giants on Sept. 21, 2003.

And then the following week he bested his career-long by sailing home a 54 yard field goal.

Around the NFL this year, the woes of missed field goals are being felt far and wide. Amongst all Kickers (who have attempted a minimum of 10 field goals), the percentage of successful field goal attempts is 83.7. Hopkins is 11/12 for 91.7 percent, with his only miss being a 53 yarder vs. Atlanta.

Booming leg strength isn’t the only weapon that Hopkins possesses in his bag of tricks either. Coach Gruden refers to Hopkins’ onside kicks as “magic balls”, and the Redskins became the first team in the NFL to recover an onside kick in 2015, doing so against Tampa Bay in a heroic come from behind victory. Across the NFL, teams were 0-24 on onside kicks before Hopkins successfully placed the ball where only his hands team could get it.

Kickers are often maligned when they make mistakes, and ignored when they do their job adequately. By every conceivable metric that pertains to Kickers, Hopkins is a reliable revelation for the Redskins in a season when Kickers have been anything but reliable. For that, he deserves special attention.