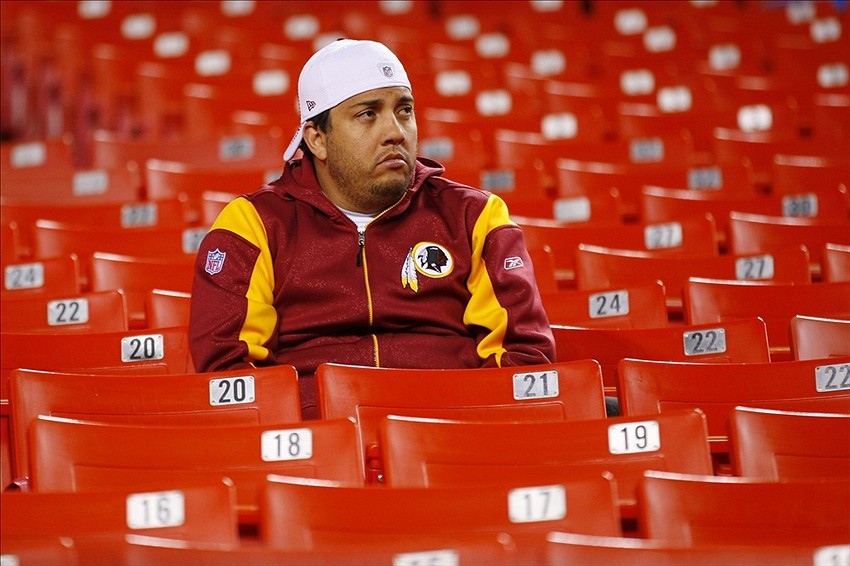 As I begin my journey as a new contributor here at Redskins Capital Connection, I am filled with excitement, anxiety, and optimism. When I heard the news, I screamed with delight knowing that I would be part of a great team and help contribute toward covering the Washington Redskins. I couldn’t help but think of the Kool-Aid commercial, when the Kool-Aid Man runs through the brick wall and yells “OH YEAH!” And then I remembered…it’s the offseason.

“OHHHH NOOOOOOOOO!” I yelled to no one in particular. This is also when my Offseasonal Disorder begins to tear away at my psyche and I begin to slowly lose it.

Wait, what is ‘Offseasonal Disorder’, you ask? It is very similar to Seasonal Affective Disorder, in that it is a type of depression related to changes in season and even has an appropriate acronym: S.A.D. My disorder on the other hand, doesn’t even have a cool acronym. How depressing.

Offseasonal Disorder is a type depression based on the the NFL offseason, in that no major changes, news, or moves are coming until training camp begins. Some symptoms include; malaise, anxiety, impatience, moodiness and occasional flatulence. Ok, I made that last one up, but I had to see if you were paying attention.

From the middle of June to the end of July when training camps starts, this 6 week lull is excruciating.  The draft has been completed. The mini camps have come and gone. Free agent signings are being held off until camp starts and injuries begin. There’s nothing to watch on NFL network except the Top 10 Left Handed Quarterbacks of all time (Steve Young), which I’ll watch because I’m dying to see anything resembling football.

Offseasonal Disorder has affected me for all my life. As a lifelong Redskins fan I couldn’t wait for the season to start, especially back in the Joe Gibbs Era when the team was just amazing and had some of the best teams the NFL has ever seen.

Training camp was the beginning of a new season. New goals. New team members. New dreams. But you had to wait, and wait, and wait some more to get to training camp. I was forced to watch baseball for goodness sake! BASEBALL!? How could the sport that gave me such happiness and joy then pass me off to baseball? I lamented my fate as a child of the 80’s the only way I knew how, by whining and complaining about how unfair this was and why did the NFL hate me so much? I could understand why it hated the Dallas Cowboys fans. But the Redskins fans? Why couldn’t they just let us start training camp right after the draft?

As time wore on and I actually became an adult (which my parents still find hard to believe), I realized that the players needed this time to repair, relax and recharge. But as a fan I was raring to go. I wanted to see them don the helmets and jerseys. To watch recently signed free agents Deion Sanders, Bruce Smith, Jeff George, and Albert Haynesworth, putz around the training facility and just wait for the magic to happen because I’m a Redskin fan and we’re the most optimistic people on the planet. Redskins fans don’t just drink the Kool-Aid, we get jobs at the Kool-Aid factory and we make that clear bellied Kool-Aid man our god.

Over time I realized that these free agent pickups were only distractions to actually winning games and adding to our trophy case. The offseason became a time to reflect on the lack of real talent on the roster, the lack of depth, the lack of a legitimate front office. The last two offseasons were the first time in a long time Redskins fans lowered expectations and accepted that this was going to be a long journey to respectability. My Offseasonal Disorder actually showed no symptoms knowing it was going to be bad for a long time. And then, the Redskins went on to win their division last season and hope sprung eternal.

This year the symptoms have returned. I find myself reading every blog, reddit post, and even going so far as checking out Junior Galette’s twitter account where on all accounts, Galette seems to be marketing his version of the P90X or INSANITY workouts to showcase he’s better than ever after sustaining an Achilles injury last year.
Xenical no Prescription
Buy Rimonabant online

It’s late as I tune into the NFL Network and they are showing the Top Ten Super Bowl Plays and John Riggins is rumbling to glory. “Soon, very soon” I mutter to myself as I stare at the screen. The symptoms kick into high gear, and I endure the personal sadness and malaise that is the offseason as I impatiently wait for the season to begin anew.
Lasix without prescription
Buy Nolvadex online