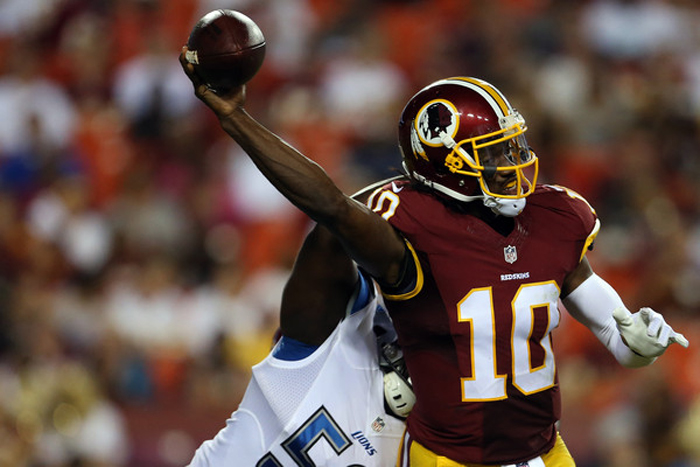 For the second week in a row the Redskins have come away from a preseason game victorious on the scoreboard but with more questions than answers stemming from the game.

The biggest storyline from the game is certainly that of Quarterback Robert Griffin III and the amount of hits he took, including the final hit that saw him sustain an (apparently mild) concussion after he fumbled the ball on a very strange playcall on third and long. More on that later.

The hits that Griffin took tonight were brutal. On 8 dropbacks, Griffin was hit 6 times including 3 sacks. As a Quarterback it doesn’t matter if you’re a rookie or a seasoned veteran; getting hit on 80% of your dropbacks will never lead to a successful passing attack. Head Coach Jay Gruden was asked directly about the beating that Griffin took, and his response was intriguing:

“We gave up some pressure tonight no doubt about it. We have to do a better job of protecting the Quarterback, better scheme wise and stay out of those nasty third and longs.”

Notice that he didn’t single out anyone specifically, including Griffin. Gruden is learning from his rookie season that throwing players under the bus doesn’t serve anyone’s interests except the medias, and they don’t help the team win football games.

Last week we separated the post-game breakdown into ‘The Good, the Bad and the Ugly’, but then it was pointed out to me that Rich Tandler has been doing the same for a long time, and not wanting to step on his venerable toes as I consider him a friend, these breakdowns will henceforth be delineated as ‘What worked, What didn’t, What sucked’.