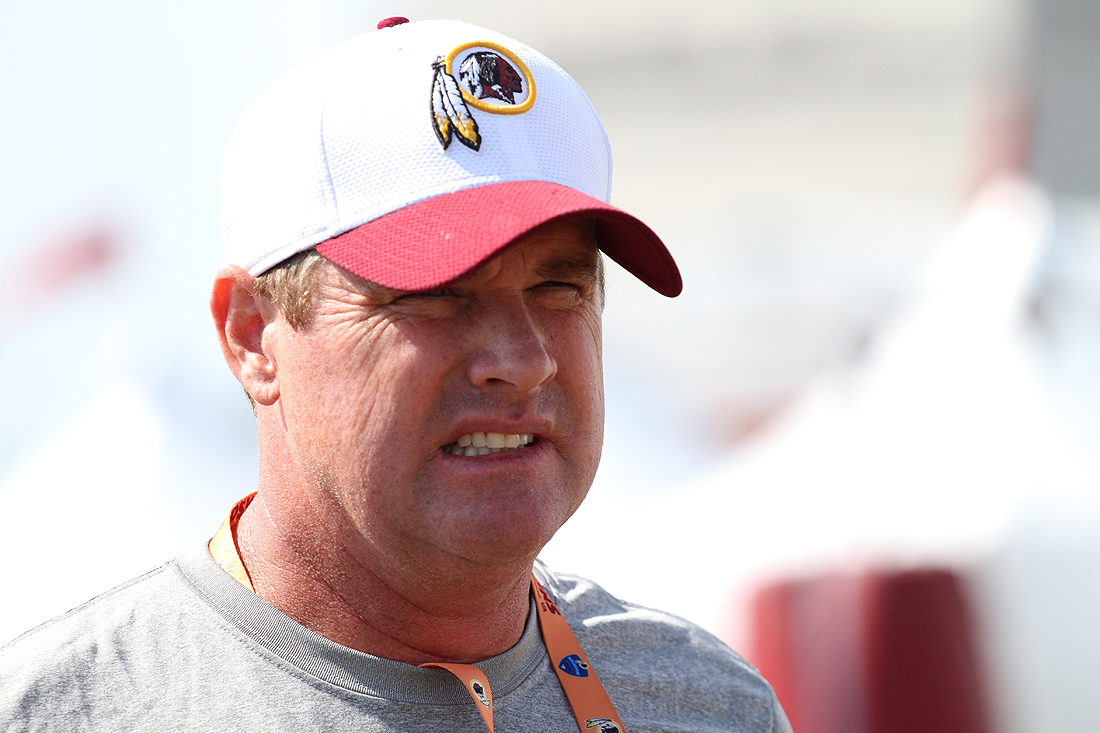 As we approach the September 5 due date for cutting down the roster from 75 to 53, the Washington Redskins have some truly difficult decisions to make. An offseason that has seen more than it’s fair share of season ending injuries to projected starters has resulted in a total adjustment to how General Manager Scot McCloughan and Head Coach Jay Gruden now have to approach the way they manage this list.

The other change that had huge ramifications on how the makeup of the final 53 man roster will look was the switch made from Robert Griffin III to Kirk Cousins. If the prediction emanating from a chorus of Redskins beat reporters that suggests Griffin should not and will not be on the Redskins roster holds true, then the Redskins would be unlikely to carry three Quarterbacks, resulting in an ‘extra’ roster spot to be used somewhere else.

Although not all projected starters are currently healthy, the Week 3 Preseason game against Baltimore also provided indications that confirmed a few things that we had been thinking since Training Camp regarding who had won position battles and where certain players would line up. 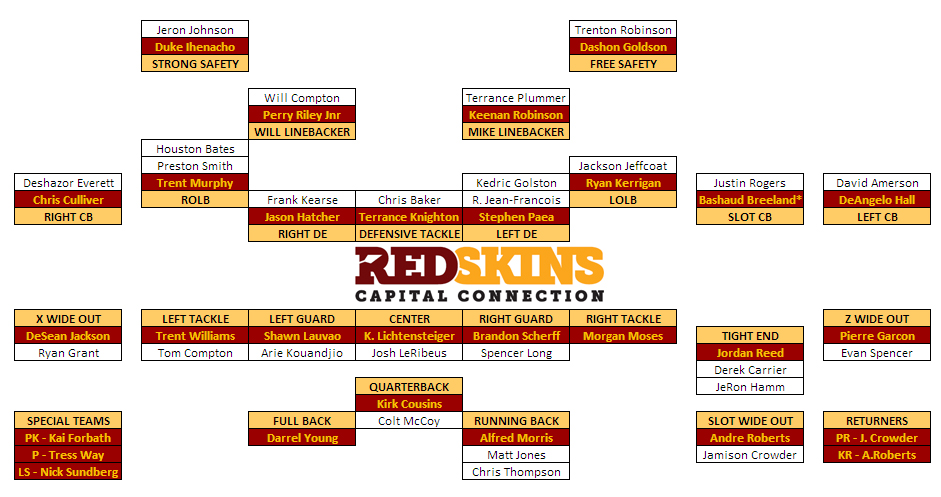 The five starters across the Offensive Line are now locked in stone.

Trent Williams is the anchor that holds this unit together, and when he’s on the field the other four linemen play noticeably better. He frees up Left Guard Shawn Lauvao to concentrate on his assignments on each snap, and the reverberations are felt all the way through the line to Right Tackle Morgan Moses.

Both Moses and Brandon Scherff are still a work in progress, but they still represent a significant improvement to the right side of the Offensive Line in comparison to the personnel the Redskins plugged in there in 2014. They will have their work cut out for them throughout the year, but like all young players the more snaps they get the more cohesive they will become as a pairing.

In terms of the backups that the Redskins will carry on their final roster, Tom Compton is likely to see the most action (barring any injuries to starters). Already in preseason we’ve seen Compton be utilized as an extra blocker in certain packages, and there’s no reason to believe that won’t also occur in regular season action.

The combination of Arie Kouandjio, Josh LeRibeus and Spencer Long all provide Offensive Line Coach Bill Callahan with something he values enormously; versatility. LeRibeus can play Center in a pinch if Kory Lichtensteiger goes down, but is equally capable of coming in at either guard spot if necessary. Both Long and Kouandjio are young and raw, and the Redskins should hope that neither player needs to see substantial snaps this season.

The receiving corps are not a unit that is going to contain many surprises in terms of who makes the final roster. DeSean Jackson, Pierre Garcon, Andre Roberts, Ryan Grant and Jamison Crowder have their respective roster spots locked in place, leaving only the 6th spot, if in fact the Redskins do carry 6 receivers, up for grabs.

Although Rashad Ross has had an impressive preseason, catching the eye of fans with multiple touchdown receptions, the fact remains that Evan Spencer offers more to the final roster than Ross. At 6’2, Spencer is the tallest receiver on the Redskins roster, and as a rookie (as opposed to Ross who has bounced around NFL practice squads since 2013) the development of Spencer is more important to Scot McCloughan than keeping a ‘known quantity’ such as Ross.

Throughout the season the battle between Andre Roberts and Jamison Crowder will be interesting to watch as it unfolds. Roberts has been plagued with too many drops in his time with the Redskins, so if Crowder plays well he could end the season starting in the slot.

There are a small and growing contingent of fans and pundits alike who think that Matt Jones may end up as the Redskins primary Running Back after the impressive work he has done this preseason. The issue with that, however, is that Matt Jones is best utilized as a change of pace back.

Alfred Morris has earned the right to still be the Redskins bellcow back, at least on 1st and 2nd downs. He’s a consistent and reliable back who has the advantage of understanding the playbook entirely and already having an established rapport with Kirk Cousins and the Offensive Line.

There are perhaps no players on the Redskins roster who have worked harder than Chris Thompson in the past 12 months. After spending a majority of 2014 on the Redskins Practice Squad, he has put in an enormous amount of effort to improve his pass blocking and fundamentals as a Running Back. With the loss of Roy Helu Jr in Free Agency, Chris Thompson has done more than enough to cement his position as the Third Down back. The fact that he can also contribute as a returner on Special Teams is a testament to his value.

If Robert Griffin III isn’t the starter, then the consensus is that he isn’t likely to be on the Redskins roster. A fresh start for both parties is the best move forward. If that does occur, the Redskins won’t bring in a third Quarterback to replace him, instead going with the duo of Kirk Cousins and Colt McCoy for 2015.

No position has been hit harder by injury than Tight End. With the devastating loss of Niles Paul and then the compounding loss of Logan Paulson, the position was already guaranteed to see new faces. The fact that Jordan Reed has been unable to stay consistently healthy and available in his time on the team also factored in to the decision to trade for Derek Carrier from the San Francisco 49ers.

JeRon Hamm gets rewarded for his promising work during Training Camp with the 3rd Tight End roster spot. Although Hamm hasn’t gotten as much work during the preseason games as he would have liked, he has the size and physical attributes that enable him to succeed when he gets his opportunities.

Perhaps the strongest unit on the Redskins roster following the injection of talent courtesy of Scot McCloughan. The starting front 3 of Jason Hatcher, Terrance Knighton and Stephen Paea are arguably amongst the best 3-4 combinations in the entire NFL, and each of these players complements each other exceptionally well.

Perhaps the biggest strength of this unit is the versatility that Coaches Robb Akey and Joe Barry have demanded from their players. Any of the four backups can plug in at any of the other starting positions and contribute immediately. Chris Baker can play Tackle or End. Same with Ricky Jean-Francois and Frank Kearse. It is a testament to a well-coached unit of motivated players.

Two months ago the projected starting Outside Linebackers were Ryan Kerrigan and Trent Murphy. One month ago it was Ryan Kerrigan and Junior Galette. Now, it’s back to Kerrigan and Murphy. It’s hard to call something that you technically never had a “big loss”, but the addition of Galette would have made the pass rush an absolute force to be reckoned with. The explosive burst off of the line that Galette has is exceptional, and losing him to the Injured Reserve list was an unfortunate blow.

The loss of Galette does give both Murphy and Preston Smith a fantastic opportunity to contribute and develop, and it is likely that the terms “starter and backup” won’t apply to them. Instead, they’ll rotate through the position based on the various packages and looks that Joe Barry is running.

Adam Hayward was another significant player lost to season-ending injury before a regular season down had even been played, and although he wasn’t projected to start at Inside Linebacker, his contributions on Special Teams were undeniable. With Hayward on the Injured Reserve list, Terrance Plummer gets the call up to join Will Compton as the backups behind Keenan Robinson and Perry Riley Jr after flashing signs of potential during his preseason opportunities.

Chris Culliver has hit the ground running since joining the Redskins in Free Agency, and importantly has quickly established himself as an on-field leader and mentor to some of the younger Cornerbacks on the roster. He also represents a significant upgrade at the outside Cornerback position over David Amerson, which is a net-positive for the Redskins.

Veteran DeAngelo Hall lined up at his regular Outside Cornerback position throughout Training Camp and preseason, surprising some who thought he might move to the nickel position allowing Bashaud Breeland to continue from where he left off in 2014. All indications are that this is how Defensive Backs Coach Perry Fewell wants his unit to lineup this year moving forward.

Undrafted rookie Deshazor Everett joined the roster 3 days into Training Camp, and has continued to impress each day since. Whilst his technique as a Cornerback is somewhat raw, it is more developed and refined than many would have expected considering where he came from. His hustle and effort on Special Teams has also been noticed, and Everett quickly went from “just a camp body” to someone who can contribute meaningfully.

The combination of Dashon Goldson and Duke Ihenacho just works. They compliment each other well, and it is apparent that they have an innate trust in each others ability to handle their assignments on each snap. Ihenacho has especially impressed in his work against the run, tracking ball carriers like a lion stalks prey, waiting for the right moment to make his move as opposed to going early and missing the tackle.

One of the trickier spots on this roster to allocate was the backup Free Safety spot. The battle between Trenton Robinson and rookie Kyshoen Jarrett was fierce, and Jarrett did set himself apart by pitching in to help out as a slot Cornerback throughout camp when the Redskins were missing multiple guys due to injury. At the end of the day, however, Robinson’s play was what won him this battle. It was very, very close.

Who missed the cut