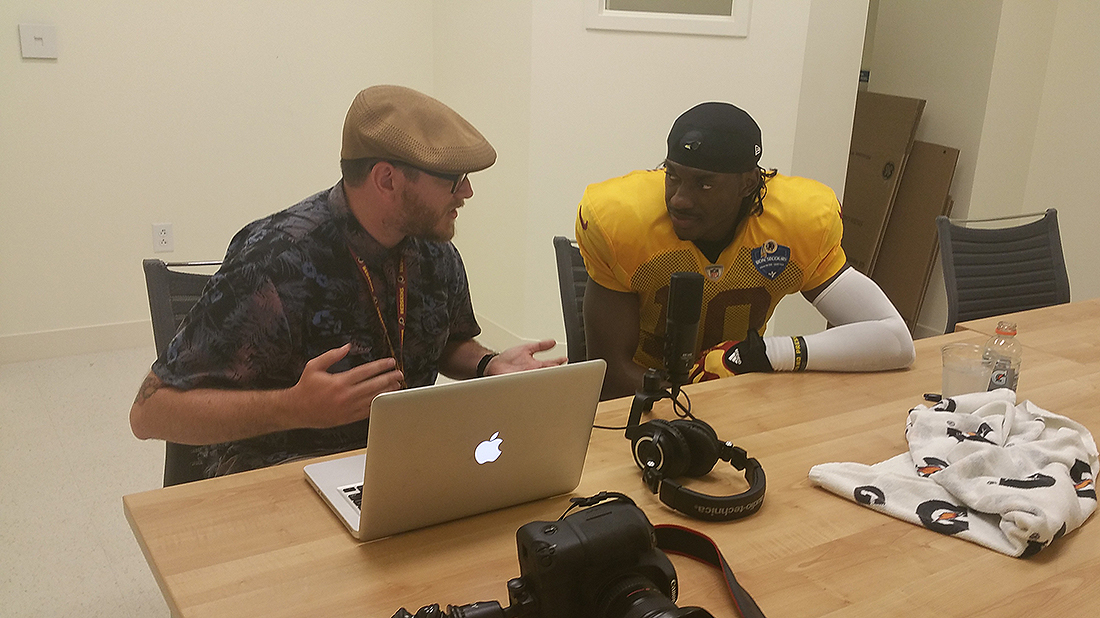 In the past 36 hours the story of Robert Griffin III supposedly claiming to be the best Quarterback in the NFL spread around like it was the sequel to ‘Gangnam Style’. Nearly every single platform, outlet, blogger and pundit chimed in, at first deriding his delusional comments, and then decrying the delirium that the media gets swept up in when comments are taken out of context.

Such is the world we live in now where superstar athletes are so used to having their words misconstrued that anything even slightly controversial they say gets endlessly spun and debated on 24 hour television networks and online. Fans and reporters alike so often bemoan how boring and scripted players are when they talk to the media these days, but is it any wonder why when we see the results of an honest quote gone rogue?

For the record, Griffin’s full quote reads as follows;

“I feel like I’m the best quarterback in the league, and I have to go out and show that. Any athlete at any level, if they concede to someone else, they’re not a top competitor, they’re not trying to be the best that they can be.

There’s guys in this league that have done way more than me. But I still view myself as the best because that’s what I work toward every single day.”

How anyone can extrapolate from that full quote some form of headline that reads “RGIII thinks he’s the NFL’s best QB” is beyond comprehension. To do so either demonstrates willful ignorance of reality, or a disingenuous intent.

With that in mind, here’s what Robert Griffin III is actually like when he talks about his skill, his confidence, and his work ethic. I sat down with him for an exclusive one-on-one during Training Camp just over a week ago, and among the questions I asked him were these three that are relevant to the storylines that are circulating today;

On if he feels more confident after a good practice session
Yeah, you just want to get better every single day you step out there, continue to challenge yourself. When you have those days, that’s great, everyone’s doing well. But then you have days where you don’t go 8 from 8, and you have to fight through that, to know that you’re getting better. You’re still getting better but there’s going to be days like that, and the next time you go out for that drive you have to try and make it happen.

On having fun as a professional athlete
Yeah that’s what you want to do. This is a fun game, and when you take the fun out of it it becomes a grind. And you don’t want it to become a grind, because it’s just a kids game. The game you play in the backyard with your friends, we’re just doing it at the highest level with the best athletes in the world. I try to make sure everyone stays loose out there and has fun and enjoy it. Don’t get too down on yourself if you make a mistake; just know that you’re not going to let it happen again.

On feeling the difference between playing well and not playing well
You try to make sure every day is a brand new day. Take each day one day at a time. Obviously everyone gets ‘hot’. You see that in all walks of sports and life. Basketball, golf… if a guys hot he’s just hot. So when you have those days when you’re just feeling it really well you make sure you ride that. But there’s going to be those days when you’re just like ‘dang, man… what can I do here?‘. You just have to get back to your fundamentals and be confident in the fact you can be a good player even on your off day.

You can listen to the full podcast with Robert Griffin III at the bottom of this page (as well as on iTunes or Stitcher).

Does anything Griffin said there give you the impression that he has an unrealistic opinion of himself? Of course not. The reality is that Griffin is a 25 year old kid who after succeeding so much so early in his career has now faced a few difficult years in a row. Accordingly, he’s still learning how to deal with setbacks and obstacles, including concocted ones.

Most real Redskins fans would already understand this, and are used to sitting back and watching outside media try and create havoc here in this market. Regardless, Griffin has done absolutely nothing but dedicate himself to trying to succeed for this city, and whether it pans out or not doesn’t give people a license to assassinate his character.