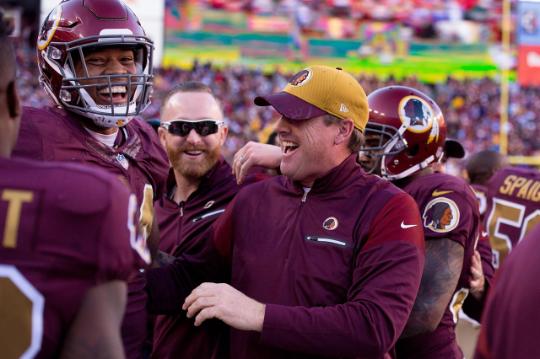 After taking a much needed bye week to rest and recover, the Washington Redskins survive another nail-biter to beat the Minnesota Vikings 26-20.

The Redskins started off strong jumping up 14-0 on the Vikings in the first quarter. However, just like the Eagles game earlier this season, the Vikings responded in a big way, scoring 20 unanswered points in the 2nd quarter.

The second half was a different story however. The Redskins defense buckled down and kept the the Vikings scoreless for the entire half. The offense moved the ball well in the 2nd half but continued their redzone struggles having to settle for 4 field goals. While it may not have been glamorous, it was good enough to get the win.

Offense: It’s not news that the Vikings defense is one of  the best in the NFL and Redskins faced a tough challenge in moving the ball against them. But as mentioned earlier, the Redskins offense came out strong and looked really sharp. The Vikings defense quickly adjusted and forced stops after the Redskins scored their 2nd touchdown. The Redskins only turnover came from a rare fumble from Chris Thompson at the end of the 1st half, which led to a last minute touchdown for the Vikings. Robert Kelley had another solid outing as the starting running back running for 97 yards on 22 carries. The offensive line had themselves a nice day as well. There was worry about how the line would do with Ty Nsekhe filling in for Trent Williams and Morgan Moses battling injuries against the Minnesota defensive line but they did well enough to put up 128 yards rushing and only one sack allowed. The biggest takeaway from this game on offense is that the Redskins really struggle with scoring touchdowns in the redzone, which has been the theme of the season so far. They continue to move the ball well but not finishing drives in the redzone will eventually come back to hurt you. Luckily they weren’t hurt this time around by it. They kept the Vikings in the game by not finishing drives and settling for field goals. They’re attack on offense was fairly balanced (33 passes to 28 rushes) which kept the Vikings on their toes in guessing what the Redskins were going to run. Overall a decent day on offense with 338 in total yards (128 of those yards on the ground), 50% 3rd down efficiency, and an average of 4.57 yards per rush against one of the best defenses in the league.

Defense: Like the offense did, the Redskins defense started out strong forcing punts on the first two drives but fell flat in the second quarter. The Vikings offense seemed to only go through two players, wide receiver Stefon Diggs and tight end Kyle Rudolph. Diggs had 13 catches for 164 yards and Rudolph had 5 catches for 69 yards. The Redskins defense seemed to struggle in covering the two receivers throughout the game. Rookie cornerback Kendall Fuller was tasked with covering Diggs for most of the game as Diggs lined up primarily in the slot. Unfortunately, Fuller had his worst game of the season having a really tough time in covering Diggs. When it came to the run defense, the Redskins showed one of the of their strongest performances of the season holding the Vikings to 47 total yards rushing. While the defense certainly had they’re struggles they managed to buckle down and keep the Vikings from scoring in the second half which was key to winning the game. The star of the game most definitely goes to sophomore edge rusher Preston Smith who had two solo sacks and his first career interception in the game. Smith before the past two weeks had been having a very lackluster season, at least stats wise. But Smith seems to have finally woken up, recording 3 sacks in the past two games. The Redskins are going to need him to keep playing at this level if they’re going to make a strong playoff push.

Redskins are now 5-3-1 and remain tied with the New York Giants (barring results of Monday night’s game) for 2nd place in the division standings. The division is pretty much in Dallas’ control with a commanding three game lead. The Redskins need to turn their focus to the wildcard race instead of hoping for Dallas to lose games. The Redskins next week face a struggling Green Bay Packers who are on a three game losing streak and just lost to the Titans 47-25. No game is ever a “gimme” or an easy win but the opportunity is there for the Redskins.