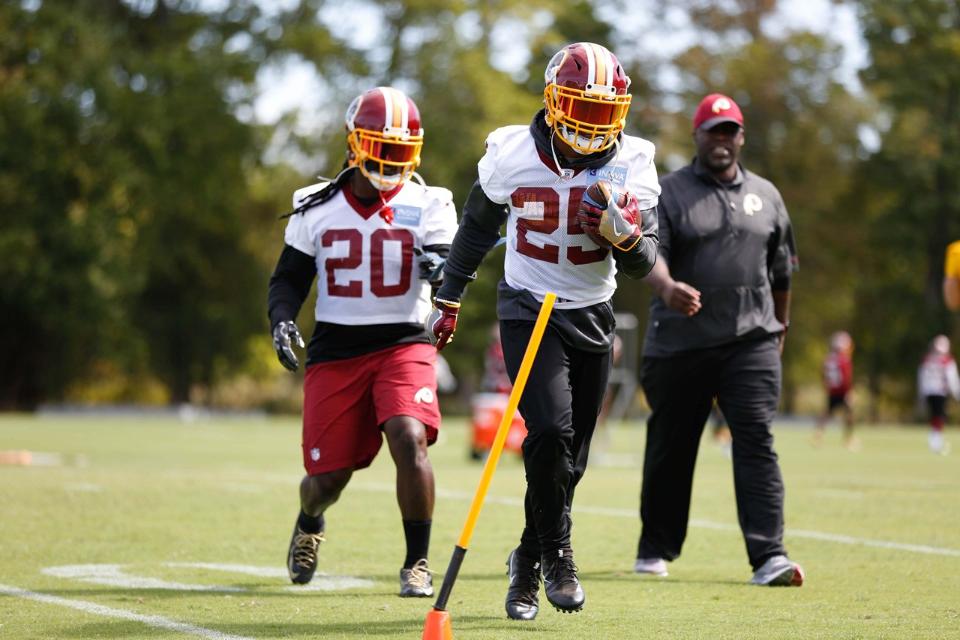 Coming off of a dominant performance on Sunday night, the Washington Redskins have a tougher test ahead of them in Week 4 against the Kansas City Chiefs. At 21.25 points, the Redskins have the 19th-highest implied total this week, and are seven-point underdogs on the road. That doesn’t put them in a great spot for fantasy football this week, but we can take advantage of a couple players with plus-matchups.

Check out which of the Redskins can help your daily fantasy lineups in Week 4.

That bodes well for him against the Chiefs, who have already given up 30 receiving yards to two running backs this season. Kansas City is allowing the 11th most fantasy points to running backs so far. With a solid matchup, and Thompson’s heavy usage in the passing game, he is worth a play in all formats.

Crowder, who has run 79% of his routes from the slot this season, will have a hard time finding an easier matchup than the gets this week against Phillip Gaines. Covering the slot 98% of the time for the Chiefs this season, Gaines is Pro Football Focus’ 107th ranked cornerback. That’s out of 110 eligible cornerbacks. The Chiefs have already given up two 100-yard games to opposing slot receivers this season.

Crowder has disappointed fantasy owners so far this year, despite already having fairly soft matchups each week, but Gaines has been very bad. And Crowder is still third on the team in targets. He is in play for both cash games and tournaments in Week 4.

What about the Rest?

The Chiefs have only given up two passing touchdowns, compared to four interceptions through their first three games. They have also held two of three opposing quarterbacks under 11 fantasy points, which means even more considering that one of them was Tom Brady. That makes Kirk Cousins‘ floor too low to consider for cash games, and there are other guys priced below him that can provide equal or better upside in easier matchups this week.

Terrelle Pryor has not lived up to expectations thus far. In the past two weeks, he has caught just four passes for a total of 50 yards. He could be used as a flier in tournaments, but that’s really all he is at this point, until he proves otherwise.

Jordan Reed‘s injury concerns could take up about 20 more lines of this article. He also has a tough matchup against the Chiefs defense that held Rob Gronkowski to 33 yards in Week 1. But like Pryor, Reed can be used as a flier in tournaments due to his very high ceiling.

Even if Rob Kelley is healthy, Thompson is still the preferred back in fantasy football, as the Chiefs have held all opposing running backs under 80 yards on the ground over the first three games.

Dustin Hopkins is an alright cash game play on FanDuel, where he is priced just $100 above minimum salary. That would allow players to spend up at other positions. But he is unlikely to be one of the highest-scoring kickers this week with the Redskins low implied total, taking him out of tournament consideration.

And lastly, the Redskins D/ST will not be in play as road underdogs.