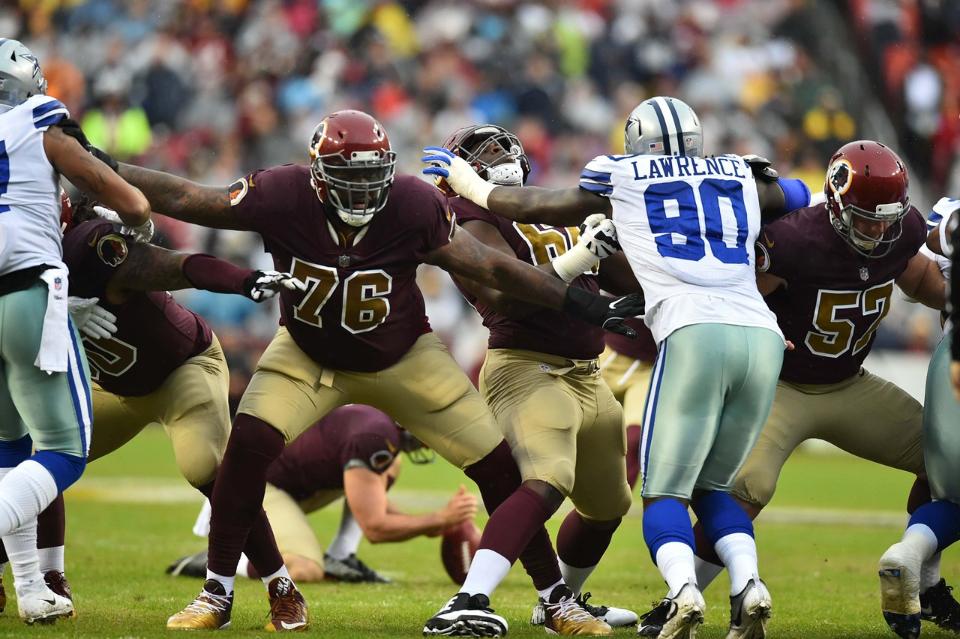 As I walked into the stadium the rain appeared manageable. Little did I know, that as I looked into the distance I could see the dark clouds rolling in that would be the harbinger of both gloom and doom.

As if on cue, when kicker Nick Rose trotted out for the field goal to extend the Washington Redskins lead to 16-7, the wind picked up furiously and lashed those in attendance with a savage rain. Rose would proceed to kick the ball a little too low and into the waiting hands of the Dallas Cowboys who would return the blocked kick back to the 2 yard line of the Redskins.

The winds of change blew, like that awesome Scorpions song, and the Redskins never recovered as they lost momentum and then the lead for good, going down 14-13.

Then in two back to back possessions in the 3rd quarter Kirk Cousins and then Chris Thompson, fumbled ensuring their own defeat.

Thompson’s fumble on special teams is the type of error that can no longer go unnoticed and begs the question of who is teaching these guys? Your answer is Special Teams Coach Ben Kotwica. He has gone largely unnoticed for too long and must be brought to task. Too many times Jamison Crowder mishandles kicks and is on pace to fumble the ball 10 times this season.  When will someone say something to Crowder and possible teach him to learn from his clearly deficient mistakes? This season or possibly next? Or how about never?

The blocked kick and fumble on the kickoff helped contribute to 10 points for the Cowboys.  This cannot go on. Even for a team destined for mediocrity at 8-8. The small things are what a coach obsesses over and throws chairs in a meeting about. The Redskins need every little bounce to go their way in order to beat good teams and these small bounces seem to be going the other way.

Kotwica needs to start doing something or begin taking more and more of the blame for his inability to make these players adapt and focus on the situation at hand. These sort of plays give too much insight into the soul of a team and shows that Redskins assume the little things will go their way even when they haven’t rightfully earned it.

Coach Jay Gruden missed what I thought was a clear detail, that showed the weather would play a factor and that balls would be slippery to hold on to. If fans knew there would be torrential rain, then the head coach certainly should have as well. Yet it seemed as if Gruden was determined to ignore it and throw the ball and not establish the run. With the offensive line being as damaged as 25 year old Redskin fan who has never seen victory, you would have assumed Gruden would have run the ball to get them settled in. Yet, Gruden wouldn’t allow a little rain stop him from running his game plan would he?

Gruden could debate that he has no decent running backs and that’s why he ignored the weather and didn’t grind it out on a day that called for it. But at least he would of sent a message to this his team that he was working within their strengths vs. making them something they were not on Sunday.

If the current trend of special teams mess ups and lack of detailed game planning continues, the conversation should start to trend toward whether Gruden is on the hot seat or not. Yet, for now, Kotwica deserves a big heap of the blame.

The Redskins have a turnover problem and until they can solve it,  expect more of what you’ve seen the last two weeks as teams who are more prepared and more adapt to the situation exploit these clear Redskin weaknesses and devour whatever remaining hope fans might have for this season.