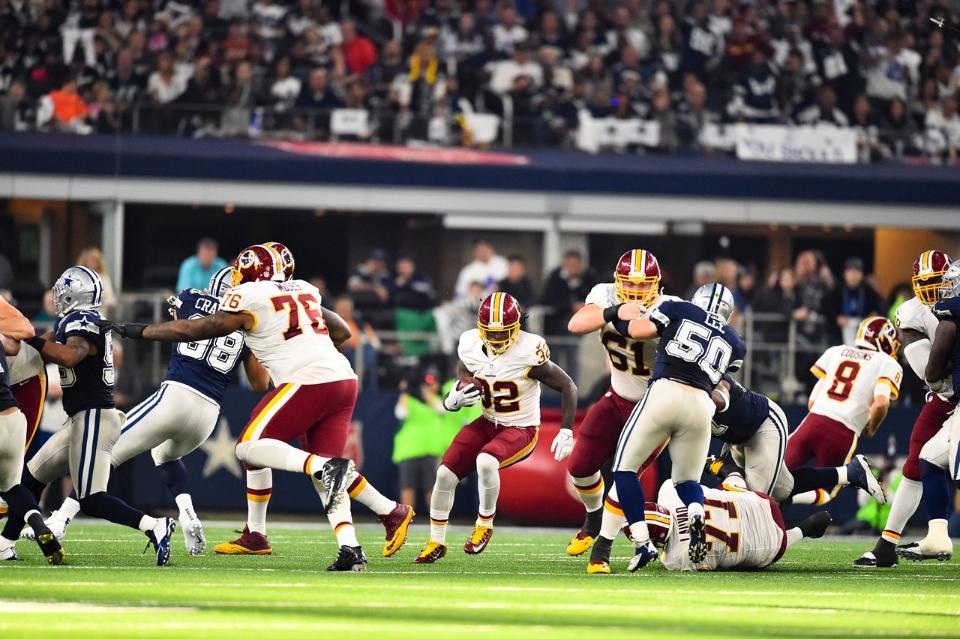 The Washington Redskins came up short against the Dallas Cowboys last Thursday losing 26-31. “But if Dustin Hopkins doesn’t miss those two field goals, they win!” This might be true, but the offense left a lot out there that could’ve made those two missed field goals irrelevant. In every game there are always plays that could’ve been better “if he didn’t do this” or “if he only did that”. The offense did have a huge day overall. Kirk threw all over the place against the Cowboys secondary- passing for 449 yards, 3 touchdowns, and no interceptions. Today’s film review is not to play “shoulda/coulda/woulda” (just a creative headline) but to highlight the missed opportunities that the Redskins had, more specifically on the ground.

This first play was early in the game:

On this play, running back Rob Kelley manages to fight for a decent enough gain. What is disappointing is that he could’ve had a lot more. What prevented this play from being a huge play is left guard Shawn Lauvao. The play is a stretch zone play to the left side. Lauvao leaves help on the defensive tackle in front of him so center Spencer Long can take him over and then climbs to block the linebacker. Where Lauvao goes wrong is that he lingered too long on the defensive tackle. Instead of just leaving a hand as help, he turns his shoulders and shoves his man to Long, which makes him fall behind on the angle he needed to take to get to the linebacker. 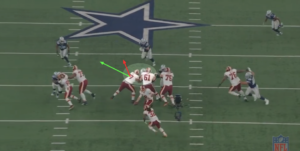 The green arrow in the picture above represents the angle Lauvao should’ve taken to get to the linebacker, the red arrow is the angle he took. I’ve said it many times and it is an overused cliche, but it is totally true, “football is a game of inches”. If Lauvao didn’t linger too long on the down guy and got his head across the linebacker, look at the alley Kelley would’ve had. He would’ve been one on one with the safety: 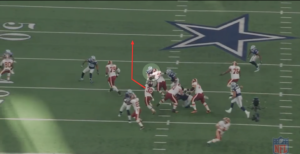 Later in the game the Redskins run a counter look out of the shotgun. Once again Kelley gets a decent gain on the play, but once again had the play been blocked correctly, there was a huge chunk of yards to be had:

Brandon Scherff pulls through off of Lauvao for a nice block. Jordan Reed fills in behind him. I believe that Reed blocked this play incorrectly. He follows behind Scherff like he is supposed to but he doesn’t block the guy the play is designed for him to block. 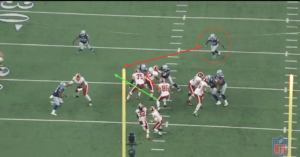 Again, the green arrow indicates the way he should’ve gone. He fills in the gap between Scherff and Lauvao when he is supposed to come off of Scherff’s left shoulder to block the linebacker. Had he taken the correct path and met the linebacker in the hole you can see the field Rob Kelley would’ve had to work with. 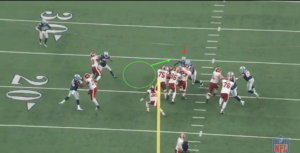 I’d like to think that Kelley would’ve been able to burst through that hole before Pierre Garcon‘s man could be in position to make the tackle.

Lastly, later on in the second half the Redskins run another outside zone play to the left side with Chris Thompson. Without going in depth on the play the initial thought is that this was a good play that got them a big first down. What if I told you that instead of just being a first down play, they could’ve had huge touchdown:

The key to this play is tight end Derek Carrier. I initially praised Carrier for this block on the play but after watching it again, he blocked this incorrectly. As I said before, this is a zone play, the rule on this play is he’s supposed to pass off that first linebacker to Ty Nsekhe and then pick up the second linebacker that comes to him. 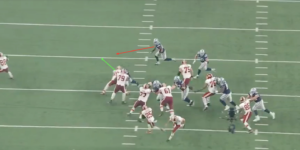 Instead he locks on to the first linebacker, leaving Nsekhe to try and reach the second linebacker. 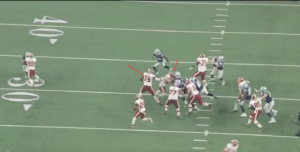 If Carrier stuck to his rule you can see the that there would’ve been no one there to stop Chris Thompson. The safety would’ve been over-pursuing and wouldn’t have had a chance to adjust to Thompson’s cut back. Touchdown. 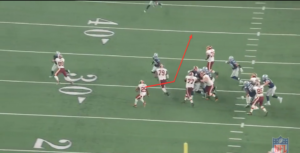 The Redskins had their big day in the air but the disappointing thing is that they should’ve had a big day on the ground as well. It wasn’t anything the Cowboys did on these example plays, just a lack on execution. This is all stuff I have no doubt that the coaches have pointed out on film to the players, and I’m sure they’re equally frustrated if not more. These are easy mistakes to fix and hopefully they’ll be corrected. All they can do now is learn from the mistakes and bounce back against the Cardinals this Sunday.