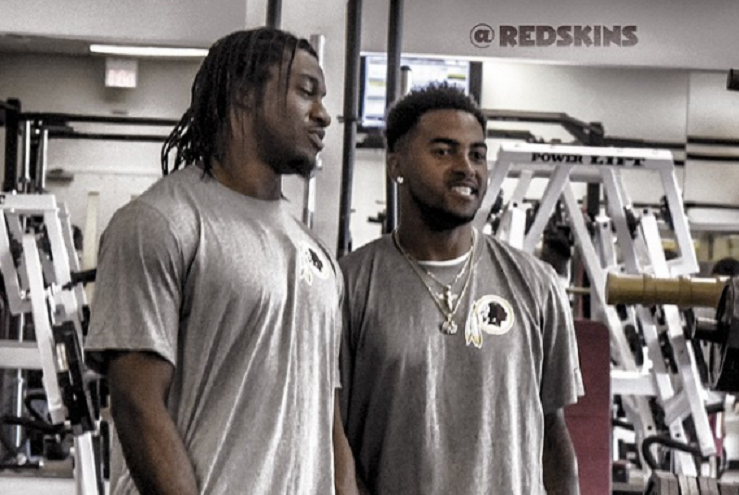 Washington Redskins players reported to work for the first time in the 2015 season today, with teams eligible to begin two weeks of what the NFL calls “voluntary workouts”.

Whenever players are unsatisfied with their contract or are unhappy about how they are being used on the field, the first sign that there’s trouble is when they skip these voluntary workouts.

From all reports, the player attendance at Redskins Park for day 1 was essentially the entire roster, with no notable absences.  From Quarterback Robert Griffin III all the way down to practice squad guys hoping to crack the 53 man roster this year, over 80 Redskin players reported to work today.

This sort of attendance on day 1 can only be seen as a huge win for the coaching staff and front office, who are looking to put the disappointing 2014 season behind them and build towards success.

Over the next two weeks, new Redskins Head Strength and Conditioning Coach Mike Clark will be putting the players through their paces, aiming to build up their fitness and resilience that will see them get through the upcoming organized team practice activities (OTAs) and the mandatory June mini-camp without suffering any soft-tissue injuries that players can be susceptible to when returning from a long offseason.

On a conference call with media today, Redskins Fullback Darrel Young spoke highly of Coach Clark’s approach to these workouts:

“Everyone is buying in, and that’s what you need. His philosophies, the kind of lifts that we do as opposed to not using machines… it’s more free weights. We’re doing stuff to kind of benefit every position and not just cater to what you do.  I thought I had the proper technique for squats down, but he’s showing me something a little different, and I feel better.”

The Redskins Offseason schedule for the rest of the offseason is as follows:

Training Camp in Richmond: No dates confirmed yet