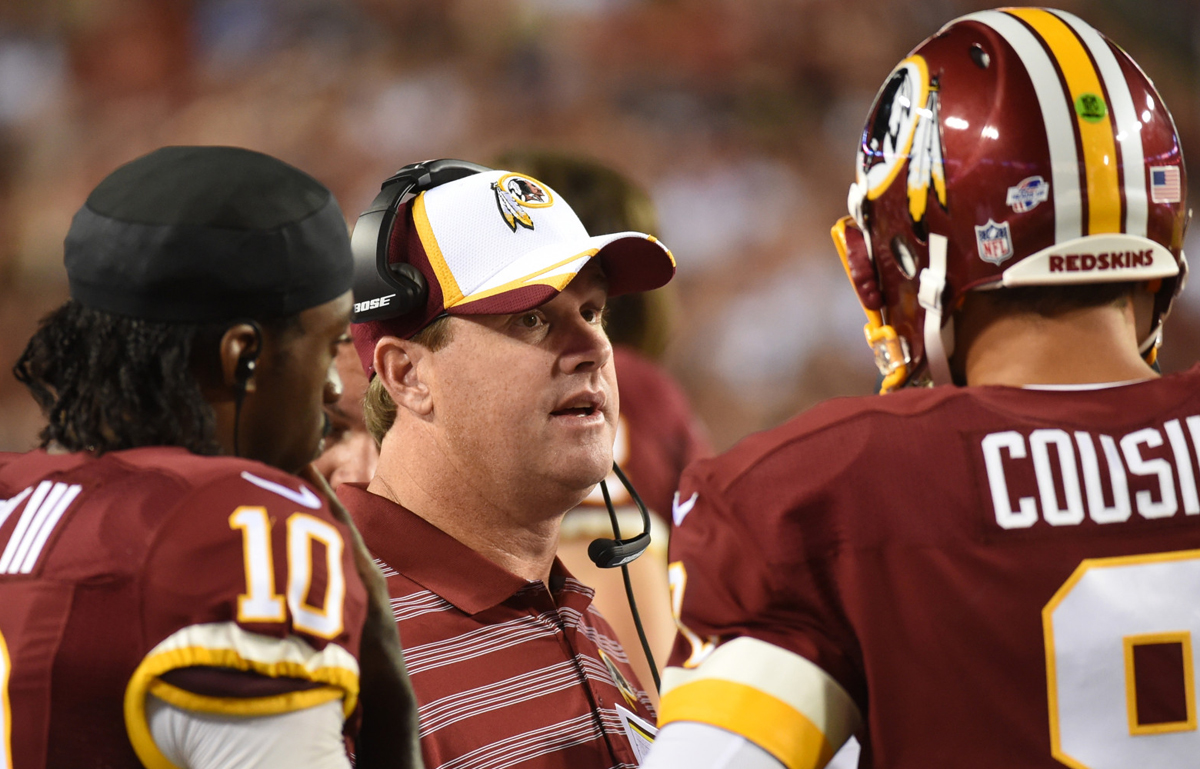 In the days since the Washington Redskins announced that they would be going into season 2015 with Kirk Cousins as the Quarterback, you’ve no doubt heard some variation of the following statement, usually delivered with conviction and certainty;

“Keeping Robert Griffin III on the roster would be an unnecessary distraction!”

Whether this line has been put forth by someone in the media or just a fan on Twitter or Facebook, it has been said so often and so loudly in recent days that most people don’t seem to have taken a step back and pondered whether or not it is actually true.

On Saturday September 5th the Redskins cut their roster down to the mandated 53 that they’ll enter Week 1 of the 2015 regular season with, and included on that roster was Griffin just as Coach Jay Gruden promised he would be. At the press conference where Gruden announced that Cousins would be the starter for 2015, he was asked directly “Do you think Griffin will still be on this team this year?”. His response was plain spoken and, seemingly, unequivocal;

“Yeah, I do. Shoot, like I said, I have nothing against Robert. I like Robert as a quarterback. There’s no doubt about it and his future with the Washington Redskins is what it is. So, there’s been no discussions about letting him go or doing any of that stuff. We are going to plan on playing with these three quarterbacks.”

There’s a trope that exists in the modern NFL regarding what Coaches say to the media, and although ‘Coach Speak‘ is usually pretty harmless in nature, it was born about from Coaches saying one thing to the media and then doing another. A common example is a Coach talking up a player who he benches, cuts, or trades.

Gruden’s comments about Griffin don’t seem to be a regular example of Coach Speak. They were too firm and committal. Phrases such as “Yeah I do [think Griffin will be on the team]”, “There’s no doubt about it”, “there’s been no discussions about letting him go” are fairly hard to walk back from if your intention all along has been to cut ties and go your separate ways. For Gruden, it would completely remove any credibility his words have when it comes to talking to the media, and that matters more than most Coaches would likely admit.

If Griffin truly does remain on the team, perhaps as the 2nd Quarterback as NFL media’s Jeff Darlington reported, then the notion that he’ll be a distraction will certainly be tested.

Sadly, the concept of Griffin as a healthy backup Quarterback is not necessarily new territory for either Griffin or the team. Since being drafted in 2012 he has twice been benched for non-injury related reasons; once at the end of 2013 he was benched for Kirk Cousins, and last year 3 games after Griffin returned from injury he was benched for Colt McCoy.

If Griffin had been a distraction as a backup Quarterback during these periods, there would have been stories. Rumblings. Displays of annoyance from his team-mates.

Instead, when Kirk Cousins was asked about Griffin, his presence on the team, and the relationship between the two Quarterbacks, Cousins said the following;

“I can’t say enough about the class act Robert has been from the day I was drafted to now. The way he has treated me, the way he has handled a lot of adversity, I have marveled at his ability as a rookie to never flinch, to compete as a young player in this league and win Rookie of the Year and taking our team to the playoffs and winning the division. I marveled at that. The way that he is a fierce competitor, I’ve always respected. He’s continued to operate that way no matter what has been thrown at him. He has always been a guy who remains classy, works very, very hard, and I’ve learned from that example.”

These are not statements that are made about someone who is a distraction to his colleagues. Rather, they are statements that backup what we’ve always heard about Griffin from day one; although he may struggle on the field, and although he has often found it difficult handling the intense spotlight that his high profile begets, when he is inside the team facilities he conducts himself as a professional who earnestly wants to do whatever he can to help this team succeed.

The argument for cutting or trading Griffin that suggests that if Griffin is on the team fans will be divided, and if Kirk Cousins starts struggling there will be disquiet amongst rival camps who want either Cousins or Griffin to be the Redskins Quarterback, forgets one simple and undeniable fact; the Redskins have been dealing with that for the past two years already. Just in reverse. When Griffin was struggling, fans were clamoring for Kirk Cousins to replace him. Yet there were no accusations thrown at Cousins that his presence on the team was a “distraction”.

Both Cousins and Griffin are professionals. They know what is expected of them, and they both know that if they want to have careers in the National Football League in the future that they need to do their jobs without unduly rocking the boat.

Let’s be clear; Griffin has made a lot of mistakes in his time with the Redskins, and we’ve covered these previously. This is by no means an attempt to completely exonerate him from blame.

The fact remains, however, that there absolutely can be a viable path forward where Griffin remains on the Redskins team as a backup Quarterback without it being a distraction.

It just requires the support of the Coach, the General Manager, and the players.

And that is what we seem to have at the moment.