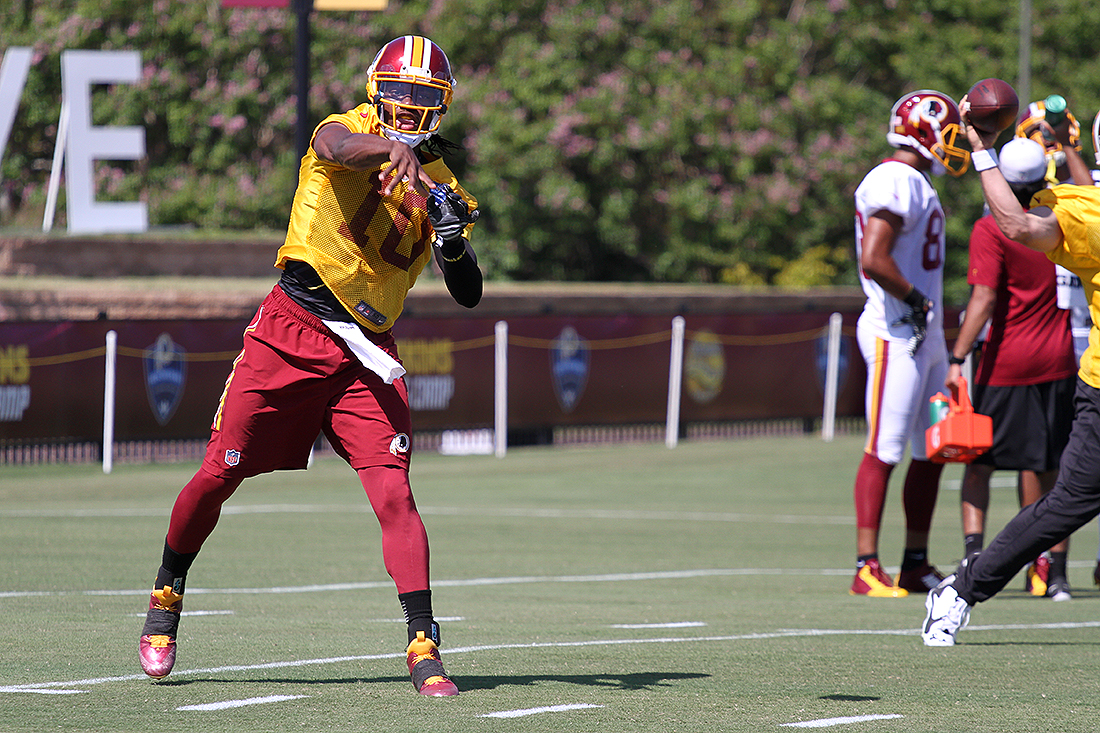 Each day Redskins Capital Connection is at Training Camp we’re going to be bringing you updated news about what’s happened on and off the field here at the Bon Secours facility, including who is winning the position battles, and what the projected 53 man roster is shaping up to look like for week 1.

Day two of Redskins Training Camp is in the books, and as far as eventful camp days go, this one will be a hard act to follow. With Junior Galette signing with the team, and Bashaud Breeland first being suspended, and then going down with an injured knee, there was no shortage of stories drawing the attention of the media out here covering the team.

Since Redskins Capital Connection will be out here for the next 9 days, on some days instead of doing an overall Training Camp Report we’ll focus on one specific factor and take an in-depth look at it. Today, we’re looking at what sort of day Robert Griffin III had.

Not including the morning session walkthrough, the first chance we got to see Griffin throwing the ball today was during Wide Receiver drills. Whilst none of the throws were made under pressure or anything close to game-like situations, it gave the Quarterbacks an opportunity to work on their fundementals such as footwork on dropbacks.

All throughout the Wide Receiver drills, Griffin was delivering perfectly thrown accurate passes. Not once did a WR miss a catch because of the throw.

In the first game simulation drills, Griffin looked sharp right out of the gates. In his first rotation through, Griffin went 4 out of 5 passes, including a couple of nice and accurate throws that lead the receivers to the ball well. Offensive Coordinator Sean McVay was talking closely with Griffin after every rotation, appearing to encourage the Quarterback to ensure he’s concentrating on his footwork and field vision.

Griffin’s best pass was a smooth deep ball to DeSean Jackson, who beat Culliver to bring in the catch. The throw had the perfect amount of touch on it, and was placed where only Jackson could get to the ball. If I’m being critical, it was perhaps slightly underthrown, but barely.

Although Griffin had already looked sharp during the previous scrimmages, during the full game-simulation 11-on-11s, he shined. Griffin threw a perfect 7 from 7, even when under constant pressure from the Redskins Defensive Line, who themselves had a strong day today.

Griffin stood tall in the pocket and released the ball accurately and quickly, even after going through his progressions. On his 1st pass, it appeared that his primary read was Garcon on an outside corner route. However, the pocket started collapsing before the route had time to develop. In previous years in these circumstances we’ve seen Griffin hold on to the ball too long and get sacked. Today, however, he demonstrated a keen awareness of the pocket collapsing, shifted off his primary read and found Alfred Morris who had slipped behind the Defensive Line and connected on the check down for a short, safe gain.

During 11-on-11’s as well, the first team offense threw in a classic QB Keeper Read Option play, which Griffin executed perfectly and the Defense bought hook, line and sinker. Griffin gained close to 20 yards running towards the sideline, showing absolutely no signs of any lingering injury issues. Instead, he looked fast, agile, and confident.

There was a good mix of short, medium and deep passes that appeared to keep the defense guessing. Perhaps the best play call on the Offense with Griffin under center was after the defense successfully sacked Griffin (credit the sack to Jason Hatcher), the next play saw Griffin execute a play-action screen pass to Running Back Chris Thompson that saw the Defense bite and Thompson getting the ball with ample space to rack up big yards after the catch.

Knowing that Griffin is absolutely a confidence player, it is encouraging for both the team and the fans that Griffin has built upon his strong minicamp and OTAs, and has begun the 2015 Training Camp strongly. So far, it appears the the shift in strategy towards how the team handles Griffin is paying dividends.