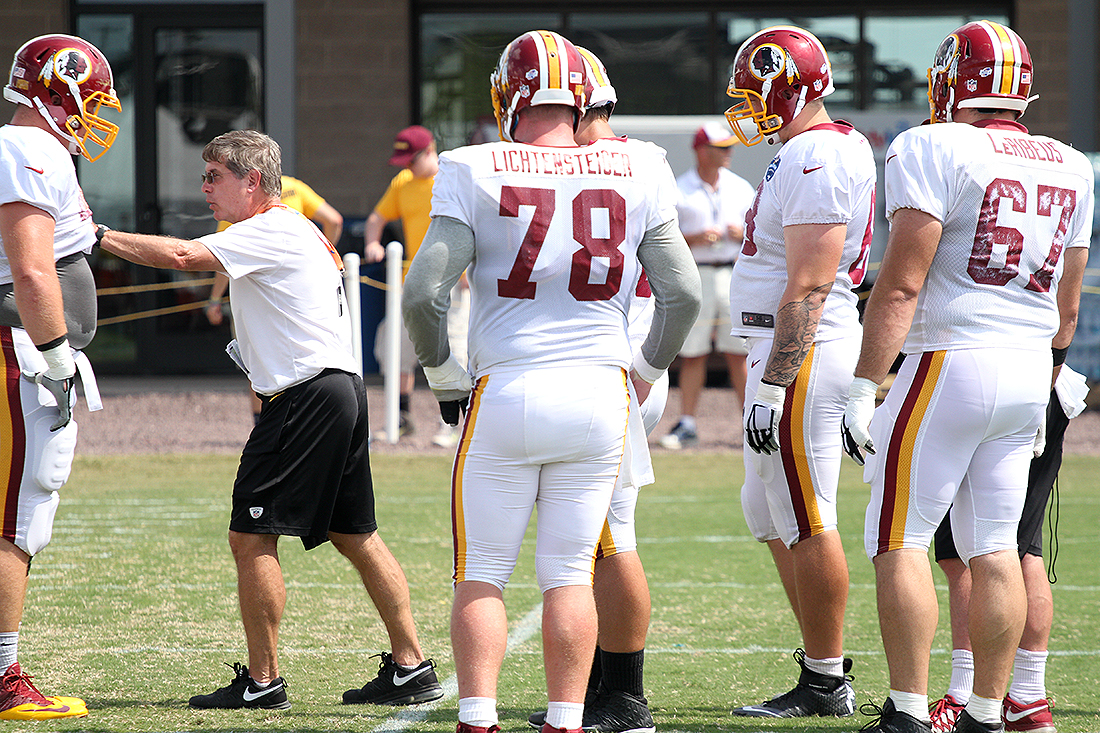 Even though the Redskins came out in shoulder pads on days 3 and 4, it wasn’t until today on day 5 that they wore the full set of game day pads. When Coach Jay Gruden was asked about the impact of wearing full pads and what he hoped the players would get out of it, he responded by saying;

It’s important for them to get used to what they’re going to wear on game day so the first time they wear it, it’s not on game day. So we’ll get them acclimated to the full pads and see how they react and run if it slows down the fast guys if it doesn’t inhibit them at all. The main thing is getting them comfortable in the outfit so they know what they like to wear and what they don’t like to wear.

With the players in full pads, and the sun sending the on-field thermometer to 104 degrees, today seemed like as good a day as any to take a more in-depth look at the Offensive Line.

When a team selects an Offensive Line player with the 5th overall pick of the draft and makes it a priority to poach one of the absolute best Offensive Line coaches in the game, it acknowledges that there have been serious inadequacies with the front-line protection in previous years. With that in mind, today Redskins Capital Connection focused on how the new-look unit is looking so far at Training Camp.

Trent Williams is, unsurprisingly, a stone-cold lock to be the Redskins anchor at Left Tackle for as long as he remains healthy. All throughout camp, whether it be during 1-on-1 drills or during full 11-on-11 team scrimmages, Trent Williams elite talent skill set continues to be evident. Even with Defensive Coordinator Joe Barry giving the Offense a wide variety of different looks, including rotating stud pass rusher Ryan Kerrigan to the Right Outside Linebacker position in certain packages, Williams confidently and competently handles whatever is thrown his way.

On passing downs, Williams is a solid brick wall. For such a big guy, he is incredibly light on his feet, which allows him to push defenders in a wide circle around the pocket, giving the Quarterback time to release the ball. On rushing downs, Williams versatility shines. Whether it be simply holding his opponent in a vice-like block, or releasing and getting through to the next-level to lay out a huge open-field block, he demonstrates a reliability and talent that firmly puts him in the class as one of the leagues true elite Left Tackles.

At Left Guard, Shawn Lauvao is still battling the emanating perception that remains from his first half of 2014, where he struggled. What many seem to have not seen -perhaps because they had simply tuned out after another disappointing Redskins season- was that Lauvao’s second half of 2014 was a lot stronger than his first half. It wasn’t until after the bye week that something seemed to click in to place for Lauvao, and he became a much improved player. He certainly has the physical attributes to succeed as his position, and at 6-3 and 315 lbs he knows how to use his strengths to not allow defenders to bull-rush him.

What Lauvao needs to keep working on is his technique for not letting defenders bend around and underneath him, and so far the work he has been doing with Coach Bill Callahan seems to be returning immediate dividends in this regard. At Left Guard, Lauvao is consistently matching up against very solid defenders such as Jason Hatcher, or even at times Terrance Knighton, and for the most part Lauvao is holding his own.

Kory Lichtensteiger again returns as the starting Center in 2015, and his job going into camp this year is significantly more difficult given the vast improvements made to the interior of the Defensive Line. The aforementioned Knighton is an absolute mountain of a man, and Lichtensteiger is the poor soul on the Offensive Line who matches up against him more often than not.

There have definitely been plays so far in camp where Knighton has gotten the best of Lichtensteiger, but when you consider that Lichtensteiger is listed at 296 lbs and Knighton at 357 lbs, it’s understandable why. Coach Callahan was working with Lichtensteiger early in camp about implementing fundamentals and techniques to try and avoid letting Knighton getting underneath his pads, which is where he is capable of doing the most disruptive damage. A common theme throughout camp so far has been Callahan tailoring techniques to be implemented for each Offensive Linesman, and for Lichtensteiger it is an important lesson to be learned.

With Chris Chester no longer with the team, second year player Spencer Long has been plugged in as the starter at Right Guard. Numerous plays during camp so far have seen Long pulling from the Right Guard position and getting into space, and this is where he has looked his best. When asked to maintain a traditional pocket, Long has done okay but there is still improvements to be had in this regard, especially when it comes to defenders shifting around on the line. When the defense moves guys around, Long can sometimes be a half-second slow at picking up his assignment. To be fair to Long though, this is his first camp working with the first teams, so there will be some things that will simply come to him over time, and this is one of them.

Brandon Scherff is the brand new toy that the Redskins have on the Offensive Line, and he seems to be absolutely relishing his first NFL training camp. As Shawn Lauvao said on the Redskins Capital Connection podcast earlier this week, the Offensive Line is very much a “learned position”, meaning that it is immensely difficult for players to simply start playing the position and hit the ground running. Whilst this is true, and there have been times where Scherff has certainly looked like a rookie, there have also been times where Scherff looks like a seasoned veteran at the Right Tackle position.

That is going to be the key thing for Scherff to work on during camp and preseason; consistency. His best is absolutely sublime, picking up blitzes, moving guys around the pocket, and not getting over-powered. However each day he has a couple of plays where he’ll get pushed around by a player like Kerrigan or Murphy a bit too much, and the pocket starts collapsing. Coach Callahan will surely be liking what he sees out of Scherff so far, and could be seen working with the rookie on day 5 on his footwork and how to make sure that he is moving rushers around the pocket, rather than letting rushers move him into the pocket.

We are predicting that the Redskins will carry four backups on the Offensive Line on the final 53 man roster.

Arie Kouandjio, the rookie Guard from Alabama with the surname that sends spell-check crazy, has demonstrated a lot of raw potential throughout the first five days of camp. Earlier in the week Coach Gruden said that he felt Kouandjio was pushing the starters well, but I think this is simply a case of ‘coach speak’, as both Lauvao and Long have looked a class above Kouandjio so far. Kouandjio’s strength is, no pun intended, his strength. At 6-5 and 310 lbs, the 23 year old has a huge wealth of raw strength he uses to his advantage. To continue developing, he’ll need to work on his blitz pickups and footwork.

Tom Compton, the Redskins Right Tackle from last year, has impressed the coaches with his versatility in camp this year. For both the second and third string units he has had stints at Right Tackle and Right Guard, and strangely enough has looked better at Guard. His experience will mean that should a starter on the Offensive Line go down injured, Compton can plug in to the line and know his role.

Both Morgan Moses and Josh LeRibius have had reasonably strong camps so far, and got a chance to run with the first team when both Williams and Lichtensteiger were given a rest day on Day 4. Rather than me telling you how I feel they have gone, I asked Jay Gruden during his Monday press conference how he felt they were coming on. Here is his answer:

Moses is really doing well. He’s coming off that injury and he’s gained a few pounds of muscle. I really like where Morgan is and where he’s going. I think he’s got a lot of upside obviously, and we felt that – that’s why we drafted him last year. He’s coming along at a good clip and as long as he just keeps studying and keeps working, he’s going to be in good shape. And LeRibeus, this is really the first time he’s played full-time center. He’s going with the twos, yesterday he got a chance to go with the ones. He’s progressing well. It’s a tough position, man. There’s a lot of calls and a lot of things a center has to take care of pre-snap. It’s brand new to him, let alone the snaps and the shotgun snaps have been efficient. We’re happy with his progress also.

Even though my intention was for my day five Training Camp report to focus solely on the Offensive Line, something happened at the end of practice that I couldn’t resist mentioning.

The ball was placed at the Redskins own 20 yard line, meaning they were 80 yards away from pay dirt. What follows here is my live tweet coverage of that drill, with Robert Griffin III under center.

Second snap dumpoff to Thompson for first down. Next snap 8 yards to Reed inbounds.#Redskins

First down 48 yd line, RGIII finds Paul, but again inbounds.
Next snap connects with Paul again for a huge gain, out of bounds, FG range

First and 10 at the 10 yard line. RGIII stands tall, checks down after progressions show no one open. 4 yard gain.

With 20 seconds left on the clock, RGIII connects with Ryan Grant on an inside slant for the TD.