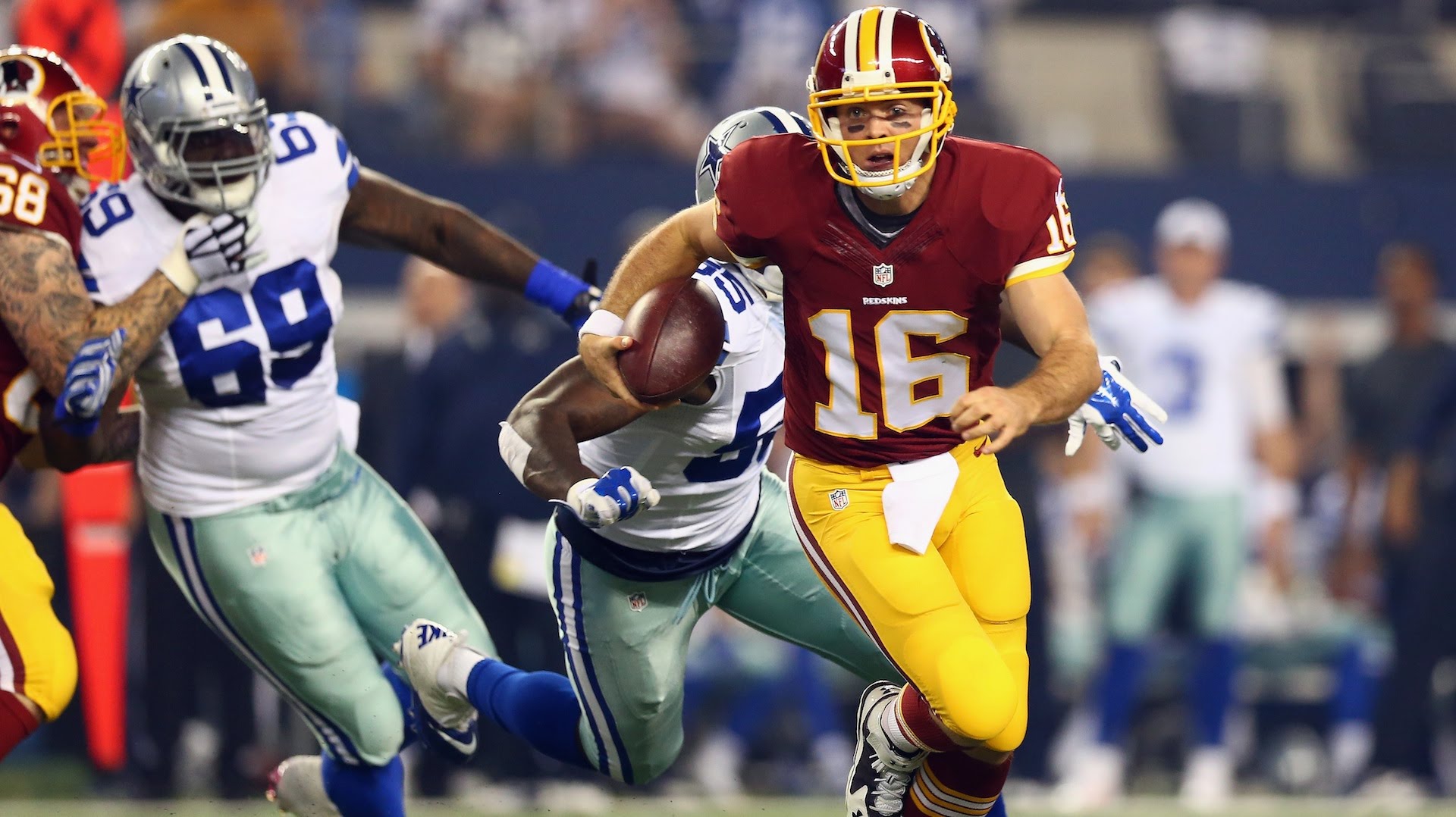 The 2014 season was another disappointing year for the Washington Redskins, with a litany of poor performances resulting in a 4-12 record.

There were, however, a handful of enjoyable moments throughout the year.

It is precisely these enjoyable moments that we are focusing on here, as we break down the Redskins top plays of the 2014 season. We have handpicked what we consider the best 15 candidates from last season, and present them to you here in handy GIF format for your review. We have displayed them in chronological order, so going through them is also a fun trip down memory lane of 2014 that completely ignores all the negative moments!

At the bottom of the page, there is a poll where you can vote on what you feel was the single best play of the Redskins 2014 season.

Chalking up 4 sacks against the Jaguars, Ryan Kerrigan was a regular presence in Jacksonville’s backfield in week 2. This sack selected here was a thing of beauty. Kerrigan recognizes the bootleg almost instantly and corrales Bortles with a fantastic form tackle that brings him to the ground for a big loss. He tops it all off with the Heart Break Kid pose.

Featuring in several of these highlights, DeSean Jackson was a consistent bright spark in a pretty dark year for Washington. His pure speed continues to be a nightmare for opposition defensive backs to try and contain, and in his first game against his former team, he took a pass 81 yards to the house and celebrated by pantomiming punting an Eagle. Fantastic.

The pass from Kirk Cousins wasn’t perfect, as Jackson did have to slow down for the ball slightly. But regardless, it was a thing of beauty to watch.

The Redskins did not have anywhere near enough takeaways last year; just one of the many factors that eventually led to the firing of Jim Haslett. This interception from Keenan Robinson came courtesy of Brandon Meriweather launching his helmet at the ball, popping it out of Larry Donnell’s hands and into Robinson’s lap. It was a fun play to watch live and it’s a fun play to watch here again and again.

I know what you’re thinking. “It’s ridiculous to include a punt as a best play”.

Well, when you are jammed up in your own end zone and then punt the ball to the oppositions 13 yard line, it’s a damn impressive effort. Tress Way was easily one of the best punters in the entire league last year, and we here at Redskins Capital Connection still can’t believe he didn’t get into the Pro Bowl.

There’s no such thing as a ‘moral victory’, but the Redskins could have felt at least a little good that they almost beat the (then) reigning Super Bowl champion Seahawks.

This play from Kirk Cousins and DeSean Jackson was a thing of beauty; Cousins throwing on the run, Jackson catching the ball in his outstretched hands, beating Earl Thomas and Richard Sherman in the process and gallivanting into the end zone. Wonderful.

After DeAngelo Hall went down with a ruptured achilles, Bashaud Breeland found himself starting at outside corner for the remainder of the Redskins season. This is a big ask for any backup, let alone a first year rookie. To his credit, Breeland came in and showed flashes of absolute brilliance throughout the season.

His first career interception showed a great ability to keep his eyes on the ball, recognizing early that Titans QB Charlie Whitehurst had been hurried and that his pass was sailing high. He positioned himself under the arc of the ball and had it fall nicely into his lap. Welcome to the NFL, Breeland.

After Kirk Cousins couldn’t get the chains moving and continued making too many errors, Coach Jay Gruden made the swap and inserted Colt McCoy into the game after half time versus the Titans. It paid dividends almost immediately.

McCoy found Pierre Garcon on a routine 10 yard curl, but Garcon then turned on the jets, beating two defenders to take it 70 yards to the house.

In what most fans would surely agree was the best night of the Redskins season in 2014, the Redskins went into Jerry World and beat the Dallas Cowboys in overtime. One of the best moments of the game came on the goal-line, where Colt McCoy executed a perfect QB Draw that resulted in him getting crunched by four Dallas defenders and yet still coming up with the touchdown.

4th and 1 conversion to Darrel Young

It’s part of the Gruden coaching school legend, and it kept the Redskins alive long enough to force the game versus the Cowboys into overtime, where the Redskins held on for victory.

On 4th and 1, fullback Darrel Young turned a relatively straightforward pass in the flats into a 12 yard gain that truly put the Redskins into scoreing range. A pivotal moment in the game.

In one of the more promising signs for Redskins fans who are still on the Robert Griffin III bandwagon, this touchdown pass to DeSean Jackson was sublime. A three step drop back, followed by a pin-point accurate pass to Jackson in between two defenders, resulting in 6 points.

In case anyone had forgotten, going through these highlights should serve to remind you just how brilliant Kerrigan’s 2014 season was.

In this play, he easily dismisses the Colts right tackle, bends the edge, and brings down Andrew Luck whilst stripping the ball loose, all in the space of about 2 seconds.

Jason Hatcher did well to disengage from his block and recover the loose ball quickly, too.

This play didn’t result in a touchdown, but it is still so very satisfying to watch Robert Griffin III absolutely demolish Antrel Rolle with a ferocious-yet-perfect stiff arm on his way to a 21 yard gain.

Watching the highlight again, it’s fair to wish that Griffin had simply run out of bounds at the end of the run instead of allowing himself to be brought down from behind. But still, that stiff arm was fantastic.

The always reliable Alfred Morris had his third consecutive 1000+ yard season in 2014, and was once again a workhorse at running back. This touchdown in the Redskins Week 16 victory over Philadelphia was his best of the season, hitting the hole perfectly, evading multiple tackles, and finally dragging Malcolm Jenkins into the end zone on his back.

Defeating a division rival is always sweet, and this Mark Sanchez throw that was intended for Jeremy Maclin but instead ended up in the hands of Bashaud Breeland was a huge part of the Redskins victory. Breeland made a fantastic play on the ball to walk away with this interception, out-bodying Maclin for position and wrapping his hands around the ball.

Another play, another example of DeSean Jackson doing something ridiculously explosive. This time, Griffin finds Jackson on a play-action pass and Jackson takes it 70 yards to the end zone.

Particularly enjoyable to watch in this highlight is Trent Williams getting to the next level and absolutely flattening Barry Church with a monster block.

There you have it Redskins fans; the Top 15 Redskins Plays of Season 2014. Vote below for what your favorite was, and let us know if you think we’ve left out a play that is worthy of recognition!