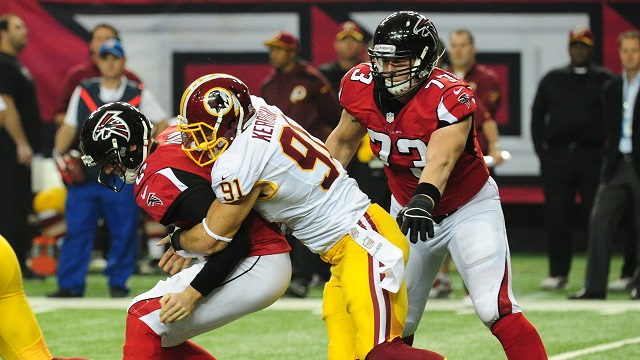 After a 90 yard game winning drive led by Kirk Cousins, an unbelievable catch by Pierre Garçon and hard running from Alfred Morris, suddenly the Redskins find themselves tied for 1st place in the NFC East. The Redskins will need that momentum going forward as this week they take on the undefeated Atlanta Falcons. This game will be one of the toughest games the Redskins face all season but at the same time, they have the potential to shock the world. Don’t expect too many people to give the Redskins much of a chance in this one, especially considering the Falcons have already defeated the rest of the NFC East. That’s a fair statement, but don’t tell the guys in the Redskins locker room. They firmly believe they could pull off this upset, and maybe even start to get some respect from the rest of the NFL.

Here are a few things to watch for as the Redskins look to pull off the upset this Sunday in Atlanta:

Slow down the best WR in football

His name is Julio Jones. Personally, I don’t even think this guy is human. He has to be from a different planet with the way he’s playing. With four games down, Jones is already half way to a thousand yard season and making guys look silly in the process. He had his weakest game last week against Houston, in which he only had 38 yards receiving. He was only targeted six times in that game. A big reason for this was because Atlanta was winning a blowout and was focusing more on the running game. Don’t let last week fool you though, he is no way to be underestimated.

The biggest concern right now is the health of CB Chris Culliver, who has been battling a knee injury. He had his worst performance of the season on Sunday when he gave up two long touchdown plays. Especially considering that the players who burned him are anything but household names, it was clear Cully wasn’t all there. Coach Jay Gruden said that Culliver will be getting an MRI on his knee and is questionable for Sunday’s game. The secondary is already thin with Deangelo Hall out, which means Bashaud Breeland will need to have a big game.

The only real chance you have of stopping Jones is by disrupting the timing between him and the Quarterback. It’s important to keep a man underneath and also over the top. The Redskins may have to rely on help from their Safeties to be sure they don’t get beat deep. It will be important for the Redskins secondary to match the effort of Jones and his intensity. If it any point they don’t do that they will pay for it.

Redskins must stop the run

The Redskins are currently ranked #2 overall in run stopping defense this season. That trend will need to continue Sunday. Devonta Freeman has put together two huge weeks back to back this season. Against the Dallas Cowboys, Freeman went for 141 yards and 3 TD’s. The next week he answered that with another 3 TD game against the Houston Texans. The Redskins need to be sure to end that momentum immediately. The Falcons have yet to face a run defense like the Redskins this season, so it won’t be an easy test for them either.

Kyle Shanahan vs his old team

It’s hard to imagine this game not having any sort of personal meaning to Kyle Shanahan who was fired from the Redskins, along with his father. He has managed to put together a very strong Falcons offense, that is now one of the scariest in the league. Led by Matt Ryan at QB, who is one of the most underrated players in the league. Shanahan doesn’t have much intel on the team now due to the personnel being different as well as the schemes, however he was apart of the squad that drafted Kirk Cousins back in 2012. He has some familiarities with Redskins player’s tendencies but I don’t see it being an advantage that would tip the scale. The issue will be how on fire this Atlanta offense is. The Redskins will have to play a very balanced defense because the Falcons are just as dangerous running the ball as they are passing it. Oh, and let’s not forget former Guard for the Redskins, Chris Chester is now the starting RG in that offense!

It’s obvious the Falcons are an offensive minded team. Currently the Falcons are the 28th ranked defense going into this game. They are allowing 390.5 YPG. If it wasn’t for Atlanta having such a high powered offense and being able to go punch for punch with other offenses, they would be in trouble. Desmond Trufant has been solid for that defense but outside of him there are holes all around that can be exploited.

The most important key to winning this game is ball control. If the Redskins can continue to dominate time of possession like they have been than they have a shot at pulling off the upset. Keeping the Falcons offense off of the field is the best recipe for success. Look for the three headed monster of Alfred Morris, Matt Jones, and Chris Thompson to stay busy this Sunday.

Opportunities will be there for the Redskins offense, they just need to take advantage of them. Also, because ATL has such a weak secondary don’t be surprised if Kirk Cousins and Pierre Garcon have themselves a nice game.

This has become a trend that I address every week that I write this article. The Redskins keep finding a way to rack up penalties and mental errors that are erasing points off the board. This team could very well have an even better record than they have now if it wasn’t for the amount of mental mistakes that they have made. Don’t make me bring up that Jarvis Landry punt return! This team needs to find a way to eliminate those mistakes and play smarter football. I’m not sure there is a real recipe for that, other than making sure each guy focuses on his own job and what he can control.

Secondly, this team must find a way to match the intensity of the first half with the second half of games. Anybody watching can clearly see that this team slows down in the second half. It makes you wonder if it’s the team being overly conservative or even complacent. The Redskins allowed the Eagles to come back from a 13 point deficit last week, and if it wasn’t for a game winning drive could have lost that game. This team needs to find a way to hold onto that momentum, because if not it will come back to haunt them…much like week 1 against the Dolphins.

#1: The Falcons have one of the worst defenses in the league. Opportunities will be there for the offense to put points on the board, but it’s crucial they take advantage of every opportunity given.

#2: The Redskins run defense. There is a very good chance that the Falcons will have a hard time running the ball against this defense. The potential is always there, but I don’t expect Freeman to have a big day.

#2: Redskins injuries. This team seems to lose a key player every single week. It’s highly questionable that Jordan Reed will play and he’s been a Pro Bowl player this season. Chris Culliver is having an MRI and could very well miss this game. On top of that we still don’t know if Desean Jackson will be out there.

#3: The Redskins secondary. With Deangelo Hall out and Culliver questionable this secondary is very exposed. Bashaud Breeland could very well find himself  lining up in front of Jones and will need to match his intensity. He’s done it before against guys like Dez Bryant but he will need to have a huge game. Kyshoen Jarrett has been a pleasant surprise and had a strong game against Philly, he will also need to step up. Right now there is no question the secondary is the biggest weakness on this team right now.

Washintgton Redskins vs Atlanta Falcons is this Sunday (Oct 11) at 1:00pm EST on FOX