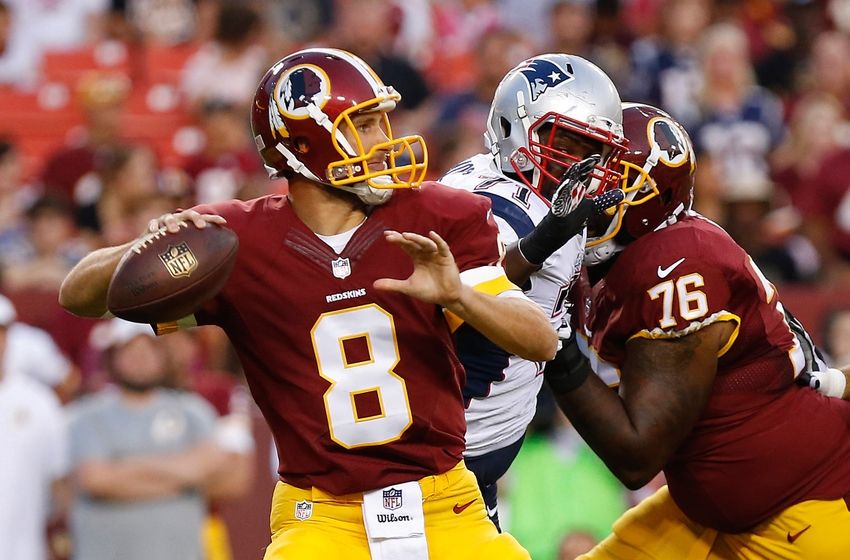 The Redskins and their fans were at an all time high after the team had their greatest comeback in franchise history, but the mood is a bit different this week. The good news is that the Redskins bye week came at a great time and allowed players such as Desean Jackson, Chris Culliver, and Deangelo Hall to get healthy. Ryan Kerrigan will more than likely play with a broken hand, while the status for Bashaud Breeland is still very much up in the air. Kory Lichtensteiger stills seems very doubtful to play this week.

This is that game that every fan out there had circled on their calendar as the toughest game on the schedule. The Patriots could very well run the table and go 16-0. Let’s be honest with ourselves, if the Redskins find a way to pull off this win it will be the biggest upset of the season and probably in franchise history.

I do believe the Redskins will hang tougher than most people think in this game. As a great scoundrel named Han Solo once said: “Never tell me the odds!”

With that said let’s look at this week’s keys to the game, as the Redskins look to shock the world:

There really isn’t a clear cut answer to beating Tom Brady. Even Kirk Cousins called him the G.O.A.T. I tend to agree with that statement. So if you can’t beat him, all you can do is keep him off the field. The Redskins will need to find a way to get the running game going and win the time of possession battle. With that said it won’t be easy to run against the Patriots who are allowing only 96.7 rushing yards per game. At this point, Alfred Morris and Matt Jones aren’t a threat to anyone. The Redskins will have to dig deep and find a way to get their groove back in that department. The last thing you want is for a shootout between Cousins and Brady, because it’s obvious who would win.

Keep the ball out of Rob Gronkowski’s hands

This clearly is easier said than done. Rob Gronkowski is the best player in the NFL at his position and it’s not even close. There isn’t much hope for a LB to cover him, and some teams have even tried using CB’s to cover him but it all ended the same. More than likely the Redskins will play zone against him. Tom Brady is a master at looking for mismatches and will look to Gronk often, especially if he see’s Keenan Robinson or Perry Riley covering him.

The best solution to this issue is to hit Brady. Even if you aren’t sacking him, create pressure and let him know you are there. It will be crucial for the Redskins to get pressure from Ryan Kerrigan and Jason Hatcher to disrupt Brady and keep him off of his rhythm. If the Skins can do that, they can at least slow down any passes that could be going Gronk’s way or even the elusive Julian Edelman.

Earlier in the article I said the most important part of the game plan would be to win the time of possession, yes. But getting Desean Jackson back couldn’t come at a better time for the Redskins. The Patriots are allowing 249.3 yards passing through the air this season. The opportunities will be there, especially in play action if the Redskins can do some things in the run game.

This will be the first time since week 1 that the offense will look healthy and get their weapons back. With guys like Desean Jackson, Jordan Reed, Pierre Garcon, and Jamison Crowder the team has the ability to make a few big plays.

If the Patriots have one weakness it’s in their secondary. The offense will have to be aggressive at times to stay in this game.

Points on the board

This sounds like a John Madden type analogy, “whoever scores the most points will win the game.” But what I mean by that is the Redskins are averaging only 21 points a game so far this season. The Patriots on the other hand are averaging 35 points a game. Unless the Redskins running game wakes up and they are completely able to win the time of possession battle, it will be up to Kirk Cousins to put points on the board.

Kirk Cousins will need to look like a franchise QB on Sunday for the Redskins to stay competitive. In a perfect world, winning T.O.P. and getting the running game going is the best chance at victory, but against this defense it’s going to have to come through the air.

It’s very possible that after Sunday fans could go back to being ready to move on from Cousins, or if he shows up could be left wondering if he is indeed the future at the position.

I fully expect the Patriots to force Cousins to make plays and take away the run game. We’ll see how he responds.

No such thing as a morale victory

No fan wants to hear those words. As fans, we want wins! I don’t know too many realistic fans out there who believe the Redskins will win this game…but what if they do? The NFL is a crazy sport, and really all 32 teams are filled with some of the best athletes in the world. No question, the Redskins will have to be near perfect to win this game…but like what we see on Saturday’s with college football, sometimes David beats Goliath.

As a fan, have realistic expectations but never accept defeat. I know this team won’t give up.

#1: Key players returning back from injury. The bye week came at a good time, and the Redskins should hopefully get back Desean Jackson, Chris Culliver, and Deangelo Hall back on Sunday. For the first time all season, the Redskins could look pretty healthy.

#2: Patriots have holes in the secondary. I pointed out earlier that the Patriots secondary is giving up a good amount of yards through the air. The Redskins will need to be aggressive and not play ultra conservative. Take some shots!

#3: The Redskins got an extra week of preparation. Another good reason for the timing of the bye week is that it gave the Redskins more time to get ready, they’ll need it. Also, coming off of the biggest comeback in team history the Redskins are coming in with some confidence.

#1: Tom Brady. I could really put down Brady’s name in all 3 of these and it would be accurate…what can you really say? It’s Tom Brady. Good luck.

#2: Rob Gronkowski and Julian Edelman. Both guys are huge mismatch problems and cause major issues for secondaries. The Redskins will have their hands full and will need to hit Brady early and often to keep the ball out of these two guys’ hands.

#3: Bill Belichick. One of the greatest coaches to ever coach in the NFL. He’s a genius, no other way to put it.