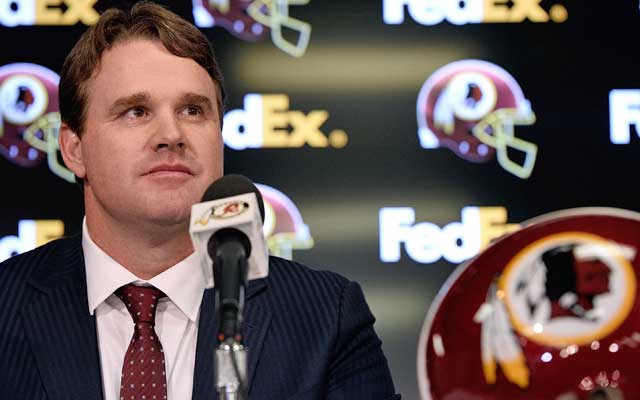 Washington Redskins new General Manager Scot McCloughan wants to establish something the team hasn’t had in a very long time — an identity. McCloughan has made it clear that he wants this football team to be hard-nosed and tough. Of course, everyone says that, but McCloughan has a résumé that points to the direction Washington is headed.

The team will be constructed much like the San Fransisco 49ers and Seattle Seahawks. With both of those organizations, Scot McCloughan and staff built those teams from the inside out — establishing the defensive and offensive lines. McCloughan also acquired tough running backs with each team — Frank Gore and Marshawn Lynch. Which leads me to believe that new rookie RB Matt Jones won’t just be a “third down back” for long. Especially after McCloughan mentioned him in the same breath as Marshawn Lynch in a radio interview last week.

My main concern for the Redskins is, I wonder if Head Coach Jay Gruden will be able to commit himself to this new philosophy. Jay Gruden has a track-record of being a guy who likes to pass the football. Alfred Morris only had four games last season in which he carried the ball 21 or more times. That’s simply not going to cut-it with McCloughan and now Bill Callahan in the fold — two guys who pretty much share the same philosophy.

One of my biggest issues with Jay Gruden prior to the team hiring him in 2014 is I felt he lacked an identity. You can watch Bengals film from his time there as Offensive Coordinator and you’ll see a plethora of things — Power O, Zone, Spread and even Read Option — however he lacked an identity. I had and still have no idea what the Gruden-philosophy is. So he must adapt.

You can purchase Bison meat, kale and Idaho potatoes for an awesome meal. But if the person preparing it doesn’t know how to use those ingredients, your idea of a meal will be ruined. The same applies for the Washington Redskins — McCloughan has brought in the ingredients that should create the atmosphere and identity he wants. However, McCloughan doesn’t coach the football team. It will be up to Jay Gruden and his staff to use these players properly.

If the Redskins want to have any success, specifically on offense, then Jay Gruden must adapt to the run first approach. This is what the team did in 2012 that helped Robert Griffin III have success at Quarterback. Alfred Morris had nine games that year in which he carried the ball 21 or more times. I understand that its widely considered to be a passing league. But the running game was a major reason for the recent success in Seattle and San Francisco. It will be a major building block for the team Scot McCloughan hopes to construct in Washington.