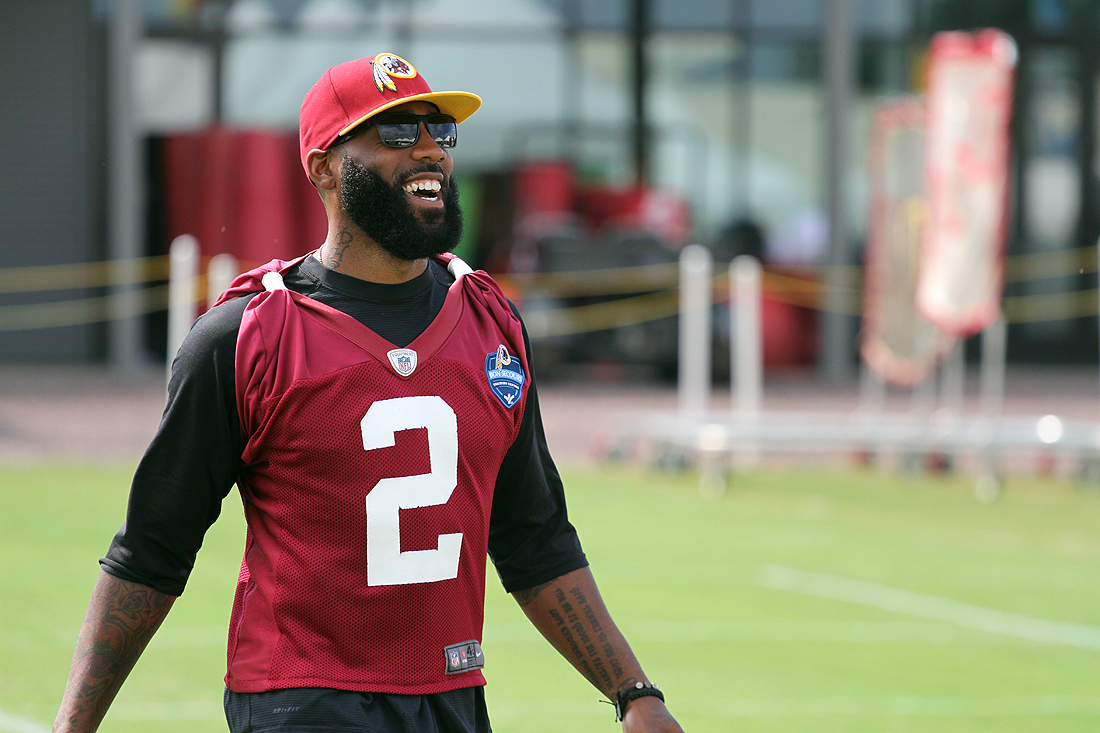 The Redskins week 3 loss to the New York Giants was costly in multiple ways, and as the dust settles from that Thursday night game one of the biggest areas of concern for Head Coach Jay Gruden is replacing injured starters Cornerback DeAngelo Hall and Left Guard Shawn Lauvao, who both seem to be heading for a bit of time on the sidelines.

How the Redskins opt to cover for the loss of both Hall and Lauvao will be an interesting study in the approach that Coach Gruden takes to his roster, and it is the focus of our article today.

Entering the season as one of the two starting outside Corners in the Redskins secondary, the toe injury that Hall suffered will necessitate a shuffling of personnel amongst a key defensive group. After Hall went down, Bashaud Breeland moved from the Nickel Corner spot to the outside; a position he spent a great deal of time familiarizing himself with in 2014 after stepping up after Hall went down with his achilles injury. However both Coach Gruden and Defensive Backs Coach Perry Fewell are on record stating that they like Breeland in the slot and feel that is his best fit this year, so it will be interesting to see what adjustment they make in week 4 versus Philadelphia.

Coach Gruden gave reporters an early timeframe for how long he expects Hall to be unavailable, stating:

“He’s going to go see a foot specialist and get it checked out. It’s a grade-two partial tear. The specialist will review it. It’ll take some time. We don’t know if its surgery, if he needs surgery yet or not. The specialist will let him know. But right now, we’re expecting at least three to four weeks, could be longer.”

If the medical diagnosis is accurate and Hall is scheduled to miss 4 weeks, the timeframe is a little awkward because it means that there isn’t really sufficient time to utilize the IR-designated to return tag. Instead, the Redskins are likely just going to have to carry Hall on their 53 man roster whilst he recovers. The coaches do, however, have options for how they can shift the pieces around the Redskins depth chart to cover for Hall.

Firstly, Corner Justin Rogers is expected to return from injury this week if there are no setbacks. Rogers played backup Nickel Corner behind Breeland throughout training camp and preseason, and if the coaches do decide to simply move Breeland to Hall’s spot, Rogers can step in to Breeland’s spot. That will leave Will Blackmon as the 4th healthy Corner on the roster. Rookie Safety Kyshoen Jarrett has also provided some assistance at Corner throughout camp and preseason when required, and although he’s not a viable long-term solution, he does provide a safety net in this regard.

More likely though is that the Redskins send someone back to the Practice Squad and promote Undrafted Rookie Cornerback Deshazor Everett to the 53 man roster to provide additional depth whilst Hall is out. The most likely candidate to be sent back to the Practice Squad is Linebacker Terrance Plummer, as Perry Riley Jr appears set to be available to return against Philadelphia. Coaches raved about the raw talent that Everett brought to the defense in the preseason, and Everett actually made the initial Redskins 53 man roster early in September, albeit for a period of approximately 24 hours before being waived and signed to the PRactice Squad to make room for TE Anthony McCoy.

At 6’0 and 193lbs, Everett brings a noticeable size and physicality to the secondary. From his first day in Training Camp, Everett worked alongside Chris Culliver, soaking up as much as he could. He could, in theory, be elevated and start at outside Corner opposite Culliver, as he has the speed and size more suited to the outside role compared to Breeland, Rogers or Blackmon. It seems unlikely that someone would walk on to a 53 man roster straight from a practice squad and start at such a vital position, but it’s not outside the realm of possibility.

Predicted Lineup whilst Hall is unavailable:

Joining the Redskins as a free agent signing in 2014, Lauvao’s time with the team got off to a slow start. He was a noticeable weak spot on the Offensive Line in the first half of the season last year, and fans quickly turned against him. For the fans who continued to pay attention throughout what was a dismal and win-deprived season, they would have noticed that Lauvao quietly and significantly improved his level of play as the year went on, and by the end of the season was a solid and dependable piece of the Offensive Line.

That trend had continued in 2015, and Lauvao cemented himself as a quality player. What shone most when watching his tape was his pure athleticism when pulling out into space, as seen in week 2 on both of the Matt Jones touchdown carries.

In week 3’s match up versus the Giants, Lauvao sprained his left ankle, re-aggrevating an injury that he sustained in Training Camp. Coach Gruden speculated that, like Hall, Lauvao too would be unavailable for a little while.

“Shawn Lauvao has a lateral sprain of his left ankle. He had swelling this morning, some strength loss, I think he’s got a chance to miss a little bit of time. That’s probably our biggest concern.”

When Lauvao left the game versus the Giants, it was Josh LeRibius who came in to replace him. However, this was a move born out of necessity more than choice, as LeRibius was the only active Offensive Linemen dressed on gameday with any sort of extensive experience playing guard; both Spencer Long and Arie Kouandjio were inactive.

Spencer Long played Right Guard almost exclusively throughout camp and preseason, seeing only a handful of snaps at any other position along the line. Rookie Arie Kouandjio similarly played predominantly Left Guard, the position in need of replacing, so he has an advantage in that regard. The issue between Long and Kouandjio is that neither player looked overly impressive when they played. Long has issues with blitz pickups, and Kouandjio is simply a raw prospect in the first few months of his NFL career.

Although he burned a lot of bridges with fans due to perceived poor play at Right Tackle, it is a widely known fact that Coach Gruden likes a lot about Tom Compton, specifically the versatility he brings to the unit. Gruden spoke about Compton on Friday’s conference call with the media, stating “Tom Compton is a valuable guy because he can both guards, both tackles and some tight end”, so the prospect of Compton plugging in for Lauvao is also one that may eventuate.

Predicted Lineup whilst Lauvao is unavailable: