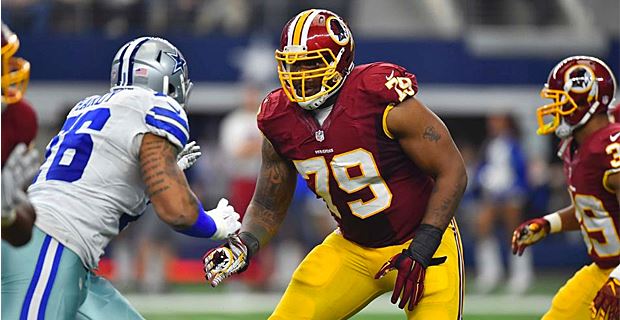 It’s not news at this point that Pro Bowl Left Tackle Trent Williams has been suspended for the next four games due to failed/missed drug tests. Williams unfortunately has put the team in a bad position because of his actions, leaving others to pick up the slack. Backup Offensive Tackle Ty Nsekhe is now tasked with protecting Kirk Cousins’ blind side filling in as the replacement for Williams while he serves his suspension. After the news broke last week, you could say that there was a little bit of a panic on losing Williams and Nsekhe being the replacement. While there certainly is a drop-off from Williams to Nsekhe, it’s not so much of one that people should worry.

Nsekhe has been on a huge climb since joining the Redskins in 2015. He came here as a camp body unlikely to make the final roster to being considered one of the best offensive linemen on the team according to GM Scot McCloughan. In his stint with the Redskins up to this point he’s only had a few chances in taking on a starting role. However, with each chance he got he showed well and proved himself to be more than just a backup but a quality starter.

Nsekhe was first thrusted in the starting left tackle role back last season against the New York Jets in week 6. Everyone feared (just like they are now) about how Nsekhe would perform against that fearsome Jets defensive line led by Muhammed Wilkerson. Nsekhe took that opportunity and turned it into a very solid performance. Take a look:

On this play, Nsekhe is matched up against the young talented pass rushing defensive tackle Leonard Williams. Nsekhe does a great job of maintaining his half-man responsibility, steps inside to take away the inside rush, and then just rides him out for a nice block. A guy like Williams is a very active pass rusher and likes to use his hands to shed blocks. Nsekhe delivers a nice punch and gets separation right off the snap and then keeps working his hands to maintain separation. For as big as he is, Nsekhe also has really good footwork. You can see his footwork on display here, he mirrors Williams every step of the way. Here’s another play against one of the best defensive lineman in the NFL, Muhammad Wilkerson:

Here Nsekhe is matched up against Wilkerson basically on his own. The offensive line is in a half-man/half-slide protection with the slide side on Nsekhe’s side. However, even with the slide protection coming his way he still takes on Wilkerson on his own. He doesn’t hardly get any help from then left guard Spencer Long. Wilkerson comes after Nsekhe with a strong bull rush move, but Nsekhe wins the block by striking with his hands inside and anchoring against the heavy push from Wilkerson. Nsekhe at the end of the rep lowers his hips and drives Wilkerson away. Can’t ask for a better block against a strong pass rusher like Wilkerson. Later at the end of the season, Nskehe started again in Trent Williams’ place and had another solid starting performance against Greg Hardy and the Cowboys.

Here on this play against Hardy, you can see Nsekhe’s hand usage coming into play again. He sees Hardy coming at him with a long arm and grabs right under his arm to nullify his move. Hardy has nowhere to go and Nsekhe maintains separation to keep Hardy from countering. Pair that block with Kirk’s quick throw on the play and you got a great block. Savy hand work like this goes a long way when matched up against good pass rushers, like Nsekhe will face this week in Everson Griffen.  On this next play Nsekhe is matched up against defensive end Randy Gregory.

Gregory was regarded as one of the best pass rushers in the 2015 NFL Draft, but on this play Nsekhe locks him down at the line of scrimmage and doesn’t give up any ground. Nsekhe immediately takes a hard step inside to take away the inside rush from Gregory, strikes with his hands inside, then uses his strength and long arms to keep Gregory at bay. Let’s take a quick look at what Nsekhe has been doing this season, shall we?

In week three against the Giants, center Kory Lichtensteiger and left guard Shawn Lauvao both went down with an injury at the end of the first half. Spencer Long came in to replace Lichtensteiger and Trent Williams was moved to left guard for Nsekhe to come in to play left tackle. After this shuffle of the offensive line, Nsekhe was tasked with matching up against talented pass rusher Olivier Vernon. Nsekhe came in and handled his business. He did end up allowing a sack against Vernon, but if you go back and watch the play Vernon only got it as cleanup duty after Morgan Moses got beat badly by Jason Pierre-Paul.

On this play Vernon comes at Nsekhe with a hard speed-to-bull rush. Nsekhe gets good depth on his pass set, lands a firm strike inside Vernon’s numbers, gets back to adjust to the second rush attempt, and anchors to end up winning the block. A great fundamental block. He later follows that great block with this one:

Here, Nsekhe jump sets out to Vernon but ends up giving him the inside rush lane. He then does a great job of adjusting and using his feet to stay with him to eventually cut off the inside lane. He then just uses his strong hands and quick feet to lockdown Vernon to keep him at the line of scrimmage.

Ty Nsekhe is no Trent Williams and he doesn’t have to be. He’s proven to be a starting quality offensive tackle and a great reserve guy to have when his number is called, he can handle himself just fine. The real concern should be our depth at tackle behind Williams, Moses, and Nsekhe. With Nsekhe starting at left tackle and Morgan Moses’ health questionable what we all should be worried about is: Who’s their replacement? Vinston Painter? Newly signed tackle Blaine Clausell? I don’t know about you but that is what has me worried. We very well may be looking at one of them at right tackle should Moses be unable to go.